THE DELIBERATION: Should I Buy a Nice Pair of Sandals?

I am not a sandals-wearing man. That is not to say that I do not own a pair of sandals… 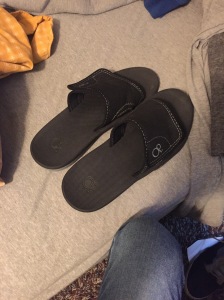 But that is to say that I don’t use those sandals for much more than when I wake up in the morning and have to put something on my feet because I don’t like walking in the kitchen barefoot and I don’t like putting my shoes and socks on too early, also I get kind of lazy sometimes about putting socks and shoes on.

These sandals, from Ocean Pacific brand, that I bought at a Wal-Mart for like twelve dollars (because it was raining so hard that night and I stepped in a puddle walking to my mailbox, so my only pair of shoes at that time was soaking wet, so I had to buy some cheap shoes to put on my feet that weren’t a pair of nice dress shoes (I walked into the Wal-Mart in soccer shorts and those nice dress shoes, by the way), so I bought these. They work fine, but I don’t wear them outside of the house. I don’t drive my car in them. I don’t do a lot of stuff in these.

I would be okay with that, but I’m met with a difficult dichotomy here. I don’t wear sandals, but I think I might like to wear sandals. My goal here is to find out why that is.

I have many reasons that I don’t wear sandals. These are a few of them:

I think I could probably debunk most of those. For instance, I just looked at my feet again, and I don’t think they’re that gross. I won’t post a picture of them, because I don’t think people would like that, and if you are a person that would like that, all power to you, but you’ll have to get that elsewhere. But I don’t think they’re gross anymore. At one point, I know, I looked down at them and I was like “gross”, but I didn’t do that ten minutes ago when I looked at them again. So the first one has been debunked

The second and third ones are about the same, actually, because they tie together. Most people I know wear sandals in the summer, which make sense. I generally don’t like summer climate clothing, because I don’t like shorts for some reason, which I can’t pinpoint and that would take like a 3,000 word blog post to find. It’s probably one of those things that you can’t really define, like my disdain for shorts is like a personal genetic problem. But sandals go with shorts, and I only wear shorts every now and then, and it’s with a record-setting, probably objectively unreasonable level of begrudgingness when I do so.

Now, nobody’s making me wear shorts, as I choose what to wear every day and I haven’t needed my parents to clothe me since I was at least thirteen years old, but sometimes it’s so hot that I gotta wear shorts. In those cases, I am met with another dilemma – I don’t know how to not look like a dork while wearing socks and shorts. I am notably horrible at judging the viability of what I’m wearing, as seen here:

This is me from October of 2013, wearing a white t-shirt, unzipped hooded sweatshirt, tan belt, orange corduroy pants, and probably socks with brown Toms.

and I am always, always self-consciousness, so the socks thing is a big deal.

It would be nice to have a good pair of, like, leather brown sandals to go with the shorts if I need them.

But then again, what if they aren’t?

Finally, I feel like I could pull off a pair of Birkenstocks. Those are relatively stylish, they seem comfortable, and they don’t look too dorky to my discerning eyes. However, I also hate to spend more than twenty dollars on anything ever. I often play a game with myself wherein I look down at myself and question how much of my current clothing came from either a thrift store or at a discount.

The Birkenstocks cost like one hundred dollars on the online internet mall known as Amazon.com. That’s more than I generally like to pay for anything, let alone a shoe that is less shoe than a regular shoe, and that I can only wear some of the time.

But I think they look cool, so maybe one day, I’ll bite the bullet, and buy a nice pair of sandals. Until then, I’ll stick with my not sandals, and I will continue to wear pants in 100+ degree weather, but I still will not post a photograph of my feet online.