It is now the time to go thrifting.

This is a map of what goes by many names – the Lawrence rectangle, the LFK Quadrangle, the KU Square, the KFC Big Box – the box created by several key streets in Lawrence, Kansas that make up the most important bits of the city. According to legend, the box started as all that’s contained within Massachusetts Street in the East, 6th Street in the North, Iowa Street in the West, and 23rd Street in the South, but at some point the western and southern borders expanded to include Kasold Drive and 31st street.

I have taken the liberty of highlighting, with a red dot, all of the places that I intend to visit on my search. These are thrift stores and record stores. Google has taken the liberty of highlighting the two most important locations within the box, which is Memorial Stadium, more commonly known as Football Hell, and Popeye’s Louisiana Kitchen, more commonly known as “the place where Joe got arrested for trying to start a fight with a urinal”. The blue dot is where I’m writing from, my room on the eighth floor of McCollum Residence Hall at KU, which still exists if you believe hard enough.

My search will begin in the southwest and end in the northeast, like a reverse imperialist takeover of the United States. 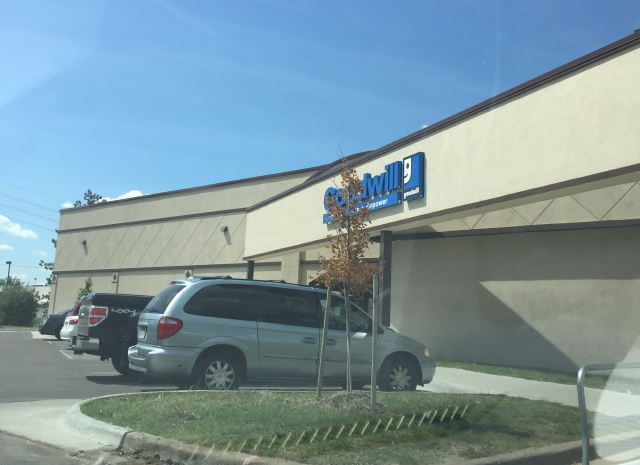 The Lawrence Goodwill is fine. Goodwill stores are a valuable part of any municipality and I’ve never had a bad experience there. They still have a rack of golf clubs for three dollars each, which is a damn fine deal if I do say so myself, and if you ever need the complete Rock Band setup for the Nintendo Wii, then this Goodwill has you covered.

I couldn’t find any piece of cassette-based equipment at all here. This Goodwill stocked a couple of DVD players and CD Boomboxes, but nothing analog except for a few VHS tape rewinders here and there. This is not to say that I left empty-handed, though, as I did find the highlight tape of the 1995 Kansas Jayhawks Football Team. Aloha Bowl champs, baby!

I immediately went home and watched the whole tape, and, yes, it is true, there was at one point good football played by the Kansas Jayhawks. There will never be another June Henley.

For those of you wondering – No, I did not take this photo while driving. I simply pulled my windshield out of my car and put my phone behind it for the artistic effect.

The Salvation Army in Lawrence is larger and older than the Goodwill, so I think it carries more clout and thus gets more stuff, generally. I’ve had better success finding anything at the Salvation Army than I have ever had at Goodwill, even though the Yamaha keyboard that I purchased there last year didn’t work.

Microcassettes are the true niche genre of music recording and transfer. If my Indie album “Songs to Browse the Online World To” ever comes out, it will be exclusively on microcassette and you will need one of these to hear it. Unfortunately, the door on this recorder will not stay closed, so I didn’t buy it.

This piece of equipment screams exactly 1980 on it. The red and black color scheme, the combination turntable, FM/AM Radio, and dual tape-deck system, the Magnavox branding, and the fact that it was full of dust when I opened one of the cassette doors are all indicative of the last gasps of hope for a Jimmy Carter presidency. I didn’t pick this up, either, but I took a long look at it. In my experience, the Magnavox name means either “Mediocre and non-functional equipment” or “HOME VIDEO 3-IN-1 TENNIS GAME PLUG DIRECTLY INTO CO-AXIAL PORT ONLY AT SEARS”

So I didn’t pick either of these up. If necessary, I’ll come back for the Magnavox but I hope I don’t have to. 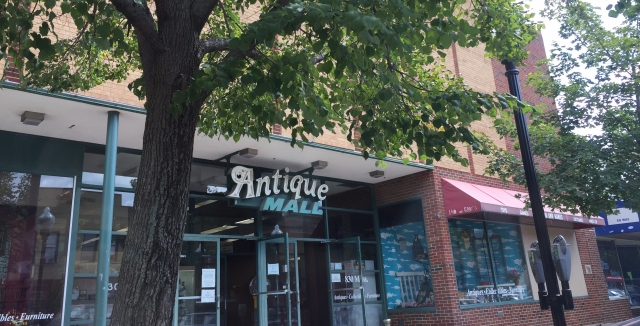 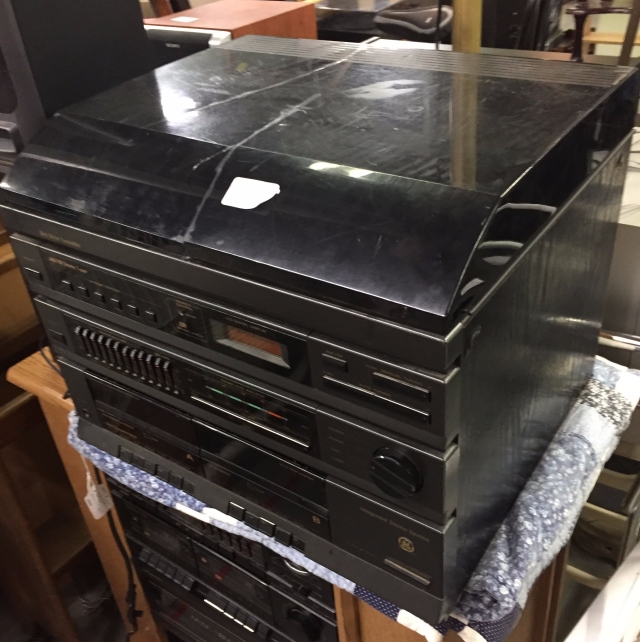 There’s actually a fair amount of audio equipment on the top floor, but most of it is of the “doubles as furniture” variety of stuff you probably bought at Radio Shack for $500 in 1988. This is bulky, old, probably not great quality, and really not what I need. If I needed an amplifier and a turntable, I might take a swing at it, but instead, I will take no swings at this combo set from the company I buy lightbulbs from now.

We also have an abandoned payphone, which I would absolutely purchase if I had unlimited space.

This was the only tape deck that I found on the ground floor, and it’s definitely antique. I’m interested in the analog knobs on the right side, they look so retro. 22 dollars wasn’t a bad price, either, but I figured with the age of the deck,  I might just be barking up a tree that would break on me once again pretty soon. Ideally whatever I purchase would’ve been made in the 1990s or sooner if possible. This is a solid find, and if there’s nothing better found, I’d take it. 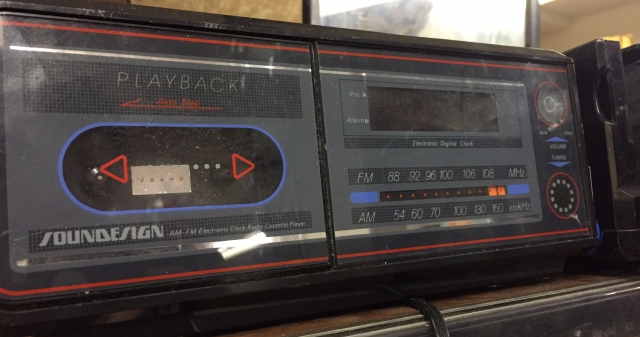 While I am absolutely in love with the idea of this combination clock/radio/cassette player, it’s cheaply made and probably wouldn’t work with what I’m doing anyway. If I were a child in the 1980s, I would’ve had something like this and I probably would’ve had the Bobby Brown Every Little Step cassingle in there and I would wake up to it every day. Hell, I might still do that.

I saw this and then promptly looked up YORX brand online, and damn does YORX brand have some haters online. One corner of the bottom floor of the Antique Mall is covered in audio equipment from whomever the vendor is. I’m actually glad that I looked up that article because there was a small chance that I would’ve come around to this. Dubbing tapes is hardly something that I need to do, and knowing that it would be done on a YORX drove me away from this.

Oh, and I found one of these on the floor. I believe that it was a Radioshack brand and, though it makes me nostalgic for the time that my junior high band teacher had me bring one of those home to make my tape for 9th grade concert band auditions, I have little to no use for it outside of experimental use, which would mostly consist of me doing audio journals not unlike the Dean from Community.

I didn’t take a picture of the store itself, but my journey ended here. This store, Love Garden Sounds in Lawrence, is fantastic and I’ve probably dropped like $300 there at least over my time in college and I intend to drop more money there as time goes on.

The night before I went on this journey, I found my ultimate end-goal – a TASCAM CD-A580 tape deck/CD combo with MP3 recording capabilities. It’s $400 from their website. I thought, hey, if I ever get in a situation where I have $400 to just drop on something or if I ever get drunk enough to make a bad decision on Amazon at 3 in the morning, this will be the model I take home.

So imagine my surprise when I ended up at the record store when I saw this, an older model of the exact thing I wanted, for less than a quarter of the price.

I will spare you the imagining and just let you know that my surprise level was very high, and I purchased this.

The third installment of this series will come out in a few weeks after I have fully embraced the purchasing and listening-to of cassette tapes. I already have a small collection, but my goal is to become a part of cassette culture, not just be someone who owns one They Might Be Giants album on cassette.