The heathen Crunch has returned, and he has ceased his perversion of the humble doughnut and has moved forward to destroy more of what we love so dearly. Crunch is a mad man and nothing more. Crunch will burn in hell for what he hath wrought to breakfast and rightfully so.

Now Crunch has bastardized his own cereal and presented his people with a false new product, an illusion of innovation that, while perhaps superior in quality to the hedonistic so-called “innovation” of Sprinkled Donut Crunch, is equivalent in wretchedness due to the transparency of Crunch’s creative bankruptcy. 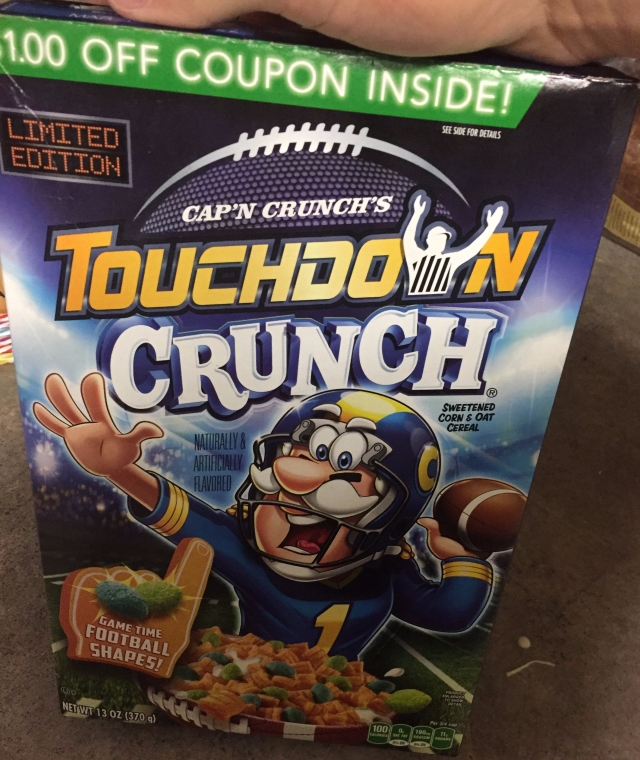 Crunch has, with the creation of this cereal, accepted mediocrity and failure as his persona. This cereal, in taste and mouthfeel, is the exact same as his original Cap’n Crunch with Crunch Berries which he launched in 1967. This cereal’s launch, in September 2017, the same month as the kickoff of the season of sport it epitomizes, is as blatantly capitalistic of a move as the heathen Cap’n could force, and it will likely pay in dividends. But what did our putrid “Cap’n” improve to give us this “Football Crunch”?

Nothing. The beloved Crunch Berries of fifty years’ existence have been oblongated, and nothing more. In taste and texture, Crunch has changed nothing, and in aesthetic, he has changed barely more than that. In pitching this “Limited Edition” marquee upon his box, Crunch has falsified scarcity, thus likely driving cereal and football supporters towards this mocked novelty of a breakfast food. In adding his “one dollar coupon” advertisement upon the top of his box, Crunch has laughed in our face, making it evident how much one dollar is worth to the commoner in comparison to Crunch’s far-reaching imperial wealth.

Your pockets may be lined, Horatio, but what lines your heart? ‘Tis nothing but blood. The same blood that lines all others. Your slutted heart, like the hearts of the people you’ve bilked with your false sportsmanship, will cease to beat one day, and your offspring will lower your body, beaten and broken, six feet beneath the ground. What will they think? What will they remember? Will happy memories fill the brains of your well-wishers as they stand in front of the headstone? Or will those words – “Here Lies Cap’n Horatio Magellan Crunch” – be stained, tainted, muddied by your money-grubbing? Will they be able to forget Football Crunch, Cap’n? Who knows. ‘Tis too late now to undo it. 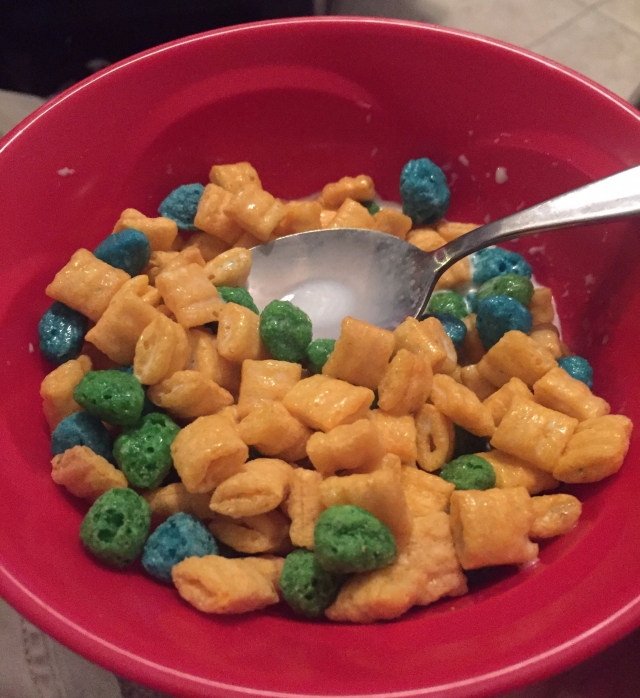 The spoon rests heavy upon this already soggy cereal. The bowl I got from my roommate.

Crunch… You must understand. Your cereal represents what your countrymen and women hold dear. “Cap’n Crunch”, the cereal named for you, “with Crunch Berries”, the berries named for you, is indicative of the American experience. Your existence is tied to this. When people see your cereal, they think not just of pouring a bowl at 8:30 on a Tuesday morning, but of growth, love, childhood, and experience that only this nation can provide (as well as anywhere that also happens to stock Cap’n Crunch with Crunch Berries), and your name is there all the same.

And what have you done? You have embodied Americanism itself, that tainted value has been tied, loosely and poorly, to the shallow patriotism in your signaling towards the sport that we hold dear. To put your name to this box is to besmirch the same name on the box beloved for fifty years with greed.

Crunch, you are no sportsman, though you wear the costumage of one. You are no innovator, though you bodly and falsely proclaim to be one. If they run your flag up the pole before a game of the sport you claim to embody, I will take no time acknowledging it. I shall not kneel in protest, I shall not spit in anger, I shall not sing to your venomous anthem. I shall remain seated and make sure that no other man falls to your heathen song and dance, for that is all you are. You are no sportsman, no innovator, no cap’n as you claim, but you are as imperialistic as it comes and you have ruined another of this nation’s once-great traditions through your avarice.