Media garbage surrounds me from wall to wall, ceiling to floor, coagulated here in a state of permanent clearance

Perhaps you have heard of the Elephant’s Foot. The massive agglomeration of nuclear-reactor runoff lava from the Chernobyl disaster is one of the most deadly places in the world. Simply standing near the Elephant’s Foot for a period of a few minutes will bring a person certain death in a matter of days. This impressive potential for bringing death stands stands in front of the fact that, effectively, the Elephant’s Foot is a big ol’ lump of garbage.

Much like Chernobyl, physical media will likely stay in the state where it currently rests forever. Those DVDs, those Blu-Rays; they’re never going to be as valuable as they once were, but they’re also not going to decay for a long, long time. Streaming media seems to have reached its apex and in all likelihood will splinter off into less-and-less usable sects as time continues. Once the free market allows for Disney, FOX, CBS, NBC, Amazon, Netflix, Google, and whoever the hell else to offer up services featuring increasingly fewer and worse works at a rate of $12.99 per month each, something will have to give, and we’ll find ourselves an era of pseudo-legal PLEX servers and whatever DVDs you still have in your desk drawer.

However, the paragon of the old way we did media cannot achieve so much of an anonymous fate. F.Y.E, and its stacks upon stacks of used DVDs and marked-down CDs, still takes up physical space at my hometown mall. F.Y.E. has manifested as optical media’s Elephant Foot, stagnated forever at some point between 2009 and whatever time you happen to stand in, collecting runoff until the either the rent rises too high or the walls of Funko Pops and Sitcom Box-Sets collapse in on themselves.

The ol’ stomping grounds, the place I called “Where I Work” for a period of summer 2014

F.Y.E. opened at the Oak Park mall sometime in either late-2002 or early-2003, according to my cursory research at the Wayback Machine. I remember specifically buying a copy of Sonic Adventure 2: Battle for the GameCube there, and the next year finding a copy of Mortal Kombat Trilogy for the PlayStation available for five dollars, reading the back of the case in futility because I knew my parents would never let me take it home.

About a decade later, with the F.Y.E. miraculously still kicking and a half-day of unbelievably frustrating work at a sports memorabilia kiosk behind me, I bought CD copies of MF Doom’s Madvillainy, A Tribe Called Quest’s Midnight Marauders, and Aesop Rock’s Skelethon there. All three of those are among my favorite ever albums. By 2014, a once-proud bastion of DVDs and CDs had shrunk, making space for more useless media-related trinkets and every cheap pair of SkullCandy headphones they could stuff in. In the following years, the racks condensed and condensed to the point where they stood on March 31st, 2019, a shadow of their former selves.

The ol’ comedy film section featured about as many nude spots as it did filled ones, featuring classics such as the 2002 Billy Crystal/Robert DeNiro buddy cop flick “Analyze That”, the sequel to the 1999 Billy Crystal/Robert DeNiro buddy cop flick “Analyze This”. They used to divvy it up, where one section stocked only new copies and another stocked only used ones, but it seems that new copies of movies just aren’t coming into F.Y.E. so much anymore. Any DVDs in their original shrinkwrap at this point were likely placed there years ago and never given a proper home.

To give you some bearings, a used copy of Me, Myself & Irene will run you $2.97 and will be placed where the Halo Anime DVDs used to be.

The DVD’s other bread-and-butter, the incredibly pricey TV Box-Set, must have flooded the F.Y.E. shelves just before people found just how much they were willing to pay for a complete series Box Set of The King of Queens or NewsRadio or Everybody Hates Chris or whatever other good (but not good enough to get remembered) sitcom from the first decade of my life happened to get pressed into a box. I don’t know what that price is, but I have to assume that it’s less than the amount that F.Y.E. was asking for the complete The Nanny series set

That is Seventy Dollars Worth of Fran Drescher if I’ve ever seen it. You can watch the scene where it sounds like her and the guy are boning on YouTube

Of course, there’s also the domain of the broken, the beaten, and the damned, the classic Compact Disc. The F.Y.E. CD section is quite sparse and probably best represented by this instance where I found multiple copies of John Mayer’s 2006 album Continuum, both priced differently. 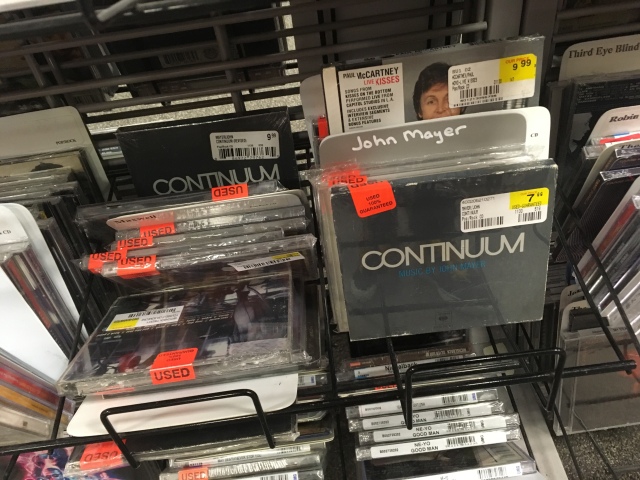 Of course, the random other media-adjacent garbage, the hair that circles culture’s shower drain, takes up the bulk of the store now. For instance, we’ve got stacks of graphic tee-shirts: 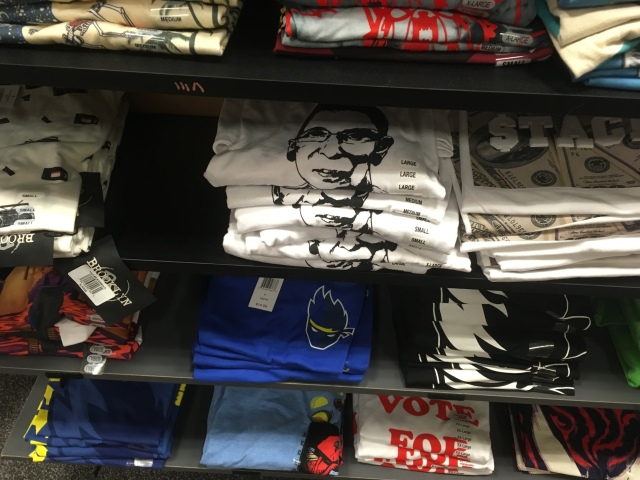 F.Y.E. celebrates America’s two greatest heroes at the moment, Ruth Bader Ginsburg from the Supreme Court and Ninja from Twitch

We’ve got the good ol’ Stack of Graphic Novels on a Cardboard Box:

My favorite thing about this is that there’s one copy of Jackass: The Movie among all these comics

And who could forget, a wall exclusively of the black-eyed figurines that creep me out but everyone else seems to love the shit out of: 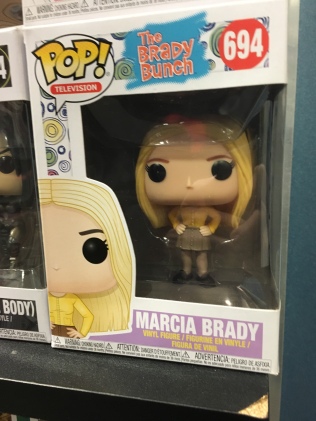 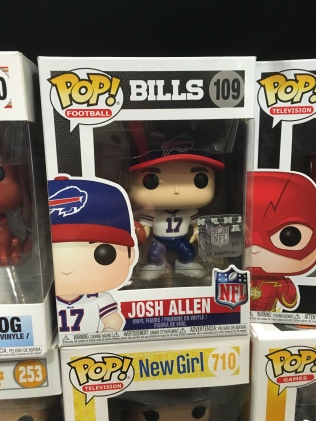 I’m currently on a search to find out the most esoteric Funko Pop that one could purchase, and I’ve settled on either Marcia Brady, the daughter from the Brady Bunch, and Josh Allen, rookie quarterback for the Buffalo Bills. I found the wife from Married With Children at a mall in San Diego and I thought that was the peak but I think these are better.

F.Y.E. is culture’s Elephant Foot. It’s a mound of whatever things, put there by whatever circumstance, which is likely never to leave again. It’s the home of last decade’s art, trapped in a permanent fugue state, never to deteriorate but never again to be relevant. A place so full of so much that will leave you feeling so hollow.

Other Joe postings can be found at The Post Hole and The Tweet Hole. You may also buy him a Ko-Fi, which will roughly cover the cost of one used DVD copy of Me, Myself & Irene. RIP Suncoast