There were three moments that defined the Kansas/Missouri rivalry for me.

This is how I choose to remember the Border War. None of these things happened on the actual field of play, fitting as the actual rivalry has taken place mostly on Twitter and assorted message boards ever since Phil Pressey didn’t get a shot off in time on February 25th of 2012. There have been assorted postseason meetings – Two in soccer, two in volleyball, one series in softball – but none have quite matched the intensity of the yearly games in men’s basketball and football, especially up near the end of the road at the beginning of this decade.

That final meeting in Allen Fieldhouse happened when I was a junior in high school, a full year out from my first semester at KU. I went through my whole collegiate career without a single Missouri/Kansas football or basketball game, which is unfortunate, considering how intensely this rivalry affected my experience in the years before attending KU.

I can trace the intense emotional connection I have to sports back to the football game in 2003, an upset, the first time I recognized the later infamous tendency of Jayhawk students to tear down goalposts in the aftermath of a win. I remember running out of my house in celebration , accidentally letting the dog run out into the front yard too, when KU closed the Hearnes Center in 2004. I was on the field after the 2005 football game. I fumed with all the fury a ten year old could produce after Christian Moody missed the free throws in 2006. I cried after the 2007 football game ended with sod in Todd Reesing’s facemask. When Kerry Meier caught a pass for the winning score in the 2008 football game right as my family pulled into our driveway on the way back from my grandmother’s house for Thanksgiving, I ran out and celebrated on our front lawn. I cried after the same thing happened to Todd Reesing again in 2009.

I was frustrated that I got to experience neither those highs nor lows when I was an actual student, especially because the reasons for those moments being stripped from the student body were so nakedly based in capitalistic bullshit – TV money, ‘conference integrity’, that sort of bullshit. For a rivalry defined by such genuine intensity and emotion to be stripped from those fanbases by such hollow, soulless, greedy suit was desensitizing to say the least.

And I didn’t really realize this until I saw the reactions of many KU fans when a resurrection of the series was announced last weekend. 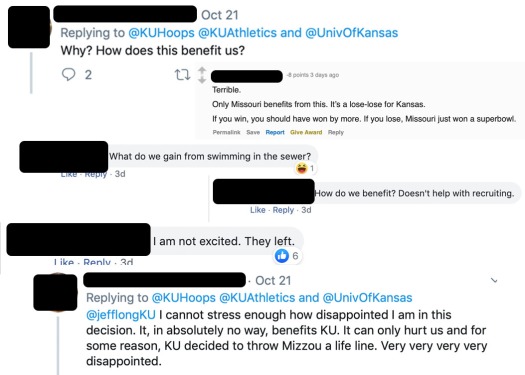 I understand the “This is a lose-lose for Kansas” quote. It feels logical, and people reiterating the point probably feel that they’re understanding something that the rest of the zeitgeist isn’t touching upon. The fans who would be excited by this are overly emotional, too attached to a rivalry of old, not looking at the big picture. They present the logical dichotomy: Kansas can never “win” in a matchup like this. Missouri is an inferior program, so it won’t mean enough if KU beats them like we’re supposed to, and if we lose to them, that means their fans will get to brag about it on forums or whatever.

I understand the logic. I understand the mindset. But it’s coming from a place of deep-seated cowardice that mostly seems to affect the minds of fans of highly successful teams. The key phrase within that lose-lose dichotomy is “if we lose to them”. In that admittance, you already have the mindset of a loser before the game’s even been played. For a fan, that’s not all that important, though it must not be fun treating every game as if you’re waiting for a shoe to drop and the dynasty to come crumbling down.

But I’ve read this argument before. I’ve read it attributed to Bill Self – “It’s not best for our program,” he used to say about a different opponent, Wichita State. That mindset couldn’t have helped when they finally did meet, in Omaha, during March Madness in 2015, and the Shockers came out on top.

Also – So what if your team loses?? That’s why they play the games! That’s a part of the experience! Sports need losing, they need heartbreak, that’s a good thing, it’s a way to feel such an intense negative emotion without the real-life wrinkles of so many other things which might cause that same sort of heartbreak.

This is the worse of the two to me. Cowardice I at least understand. The “how does this help recruiting” question, the “we should be playing a ‘relevant’ program” it’s less argued by fans and more regurgitated. It’s a masterclass in missing the whole point. The idea that some fans, not even administrators or coaches, would rather see the team do something like traveling to play Saint Josephs, so as to both maximize the recruiting potential of the Philadelphia market and boost our RPI by beating a potential top two quadrant Atlantic-10 team rather than experiencing another Scott Padgett shot to win in Columbia or Thomas Robinson block to force overtime in the Fieldhouse is just soulless.

Yeah, maybe scheduling a Clemson, or a Stanford, or a Minnesota, or some similar power-conference team with a better chance at being another BPI Top-150 win that might be the difference between a four-seed and a three-seed, but if you as a fan would choose the satisfaction of maybe getting a better NCAA Tournament seed because of a non-con December win over seeing dejected Mizzou fans filtering out of  Mizzou Arena or hearing the Fieldhouse roar and the chant echo as the clock ticks down, you are watching College Basketball in a way I could never see the appeal of.

3. Genuine Residual Resentment for Those They Consider to be Bad Actors

If you are genuinely still upset about Missouri leaving the Big XII for a more stable conference nearly eight years ago, please get over it. The enemies that these sorts of KU fans pick here, which tend to be limited to other message board patrons, are not the real enemies. The “slavers” who “betrayed” KU and the Big XII, the ones you’re stuck in catty reddit back-and-forths with, are also fans also forced to suffer through pseudo-rivalries with in-conference foes they don’t really care about in, same way you are.

The administrators who actually caused that rift – Dan Beebe, Michael Slive, Mike Alden – none of them are still in the roles they were in back in 2012. The Longhorn Network, the CBS and ESPN TV deals, the whole exploitative structure that necessitated Power Conference restructuring, incentivized the Longhorn Network’s existence, and benefitted big schools, TV networks, and conference front offices while running on the unpaid labor of Student-Athletes and selling the passion of students that any school would sell out for a couple more luxury seats for rich donors, that’s all still there, all of that still remains, and the system is going to continue picking at the bones of whatever’s still left that makes collegiate athletics so appeal until there’s no profit left to be had as long as there’s an incentive to keep pushing growth and profit.

And, yes. This is a cash-grab. This will significantly benefit Missouri and Kansas both. I don’t love that two of the six upcoming games will be played at a neutral-site stadium that failed multiple times to entice an NHL franchise to the city either. But the emotion and intensity that will come out of these matchups, the packed student sections and the jubilation and the court stormings, byproduct of a naked capitalistic grab though they may be, will all be there, and they’ll feel so much more real than whatever bullshit satisfaction may have come from scheduling a safer opponent that might help our tournament profile three months down the road.

Those three moments at the beginning of the post, while none of them happened in any field of play, they’re all valuable to understanding the mindset of this rivalry. No, William Quantrill wasn’t a Mizzou guy, and the raid wasn’t aimed at Lawrence because of the university that would be founded there two years later. But its presence as lore in this athletics rivalry – Mizzou students don’t make T-Shirts revering any other Civil War skirmish – seats it as something more than just what happens on the field. To students, and players, and fans, the Border War is more important than just a game between Kansas and Missouri’s teams. We don’t get this with Kansas State, Mizzou doesn’t get this with Illinois or Arkansas.

Then in 2007, Mizzou fans learned that having the better football team on the field didn’t mean more than whatever math the Orange Bowl selection committee used to determine that Kansas fans would travel better to Miami than Missouri fans. They were faced with the inadequacy and the recognition that what they held dear, the successful football team that had won eleven games and dominated every Big XII team outside of Norman, Oklahoma, just wasn’t that important in the face of profit.

And five years later, Kansas fans had to watch as an athletics program nearly fifty years out from its last National Championship at that point was headhunted to join a more prestigious and stable conference because of their proximity to said conference and the large-scale media markets they had stakes in. Kansas fans were faced with a similar inadequacy, and a similar recognition that no matter how many final fours Bill Self’s basketball program reached on the court, no matter how powerful the atmosphere of Allen Fieldhouse was, it just wasn’t that important in the face of profit.

The Border War’s death struck a sad, impotent sort of recognition of one’s own place in the collegiate athletics landscape in the hearts of both fans, the sort of dull pain that the Border War had spared from us over the years. On both sides – the Reesing safeties and the block of Phil Pressey – the pain was spawned from the sorts of emotional daggers to the heart upon which sports are built. This wasn’t. When the Border War went mostly into the territory of smug online schadenfreude, when KU fans’ best moments in the rivalry went from clutch touchdowns on 4th-and-1 with less than a minute to go in Arrowhead to laughing at Missouri for losing to Norfolk State, and when Mizzou fans’ best moments in the rivalry went from upset wins over a previously unbeaten KU team in double-overtime to snickering as David Beaty’s football team lost its twelfth straight… It’s just felt wrong. These two programs need each other more than a lot of fans (particularly on the Western side) are willing to admit, and I’m grateful that we’re finally going to reckon with that again.

A lot of dormant emotions are going to get unlocked on December 12, 2020 in the Sprint Center. But they’ll be real emotions, and we’ve missed them for far too long. Long live the Border War.

Oh shit now that was a whole big essay thing again wasn’t it. Maybe this is just what I do on this site now. Anyway, if you wanna slide a few dollars my way, please check out my Ko-Fi, and if you want to slide a nice twitter follow my way, do it here. Thank God for Bong Truman and Puke Big Jay.