I was recently introduced to Mrs. Coyote.

For those unaware, Mrs. Coyote is the recently introduced wife of The Coyote, which is his full legal name, who is the mascot for the San Antonio Spurs. After years of the Coyote’s existence as, theoretically, a bachelor, Mrs. Coyote entered the picture in 2018 to break up a romantic triangle between the Coyote and two different San Antonio area TV anchorwomen. To date, this is Mrs. Coyote’s only appearance. What really struck me about this was that I’d never thought of any professional American sports mascot as explicitly married before. Is The Coyote the only one?

Though there is not a lot of information about this topic online, it is not all that hard to research, because there are very few female mascots in American professional sports, and the only one that seems to exist at this stage is married to her male counterpart. That would be Mrs. Met:

Mrs. Met is the anthropomorphic baseball on the right with the eyelashes and the ponytail

Mrs. Met, as her surprisingly detailed Wikipedia page states, was introduced in the 1960s, originally as Lady Met, then later Mrs. Met during the 1970s, I suppose implying that the two were married during that era. Both she and her husband, Mr. Met, were dropped by the Mets in the 1980s. She had a brief reintroduction in 2005 for an ESPN commercial, in which she lusts over her husband in comparison to Scott Van Pelt, and was fully reintroduced in 2013. Reactions to her reintroduction have been positive and supportive, though there has been discussion surrounding how, as the youths say “caked up” she is in this current iteration. Canonically, her first name is Jan. 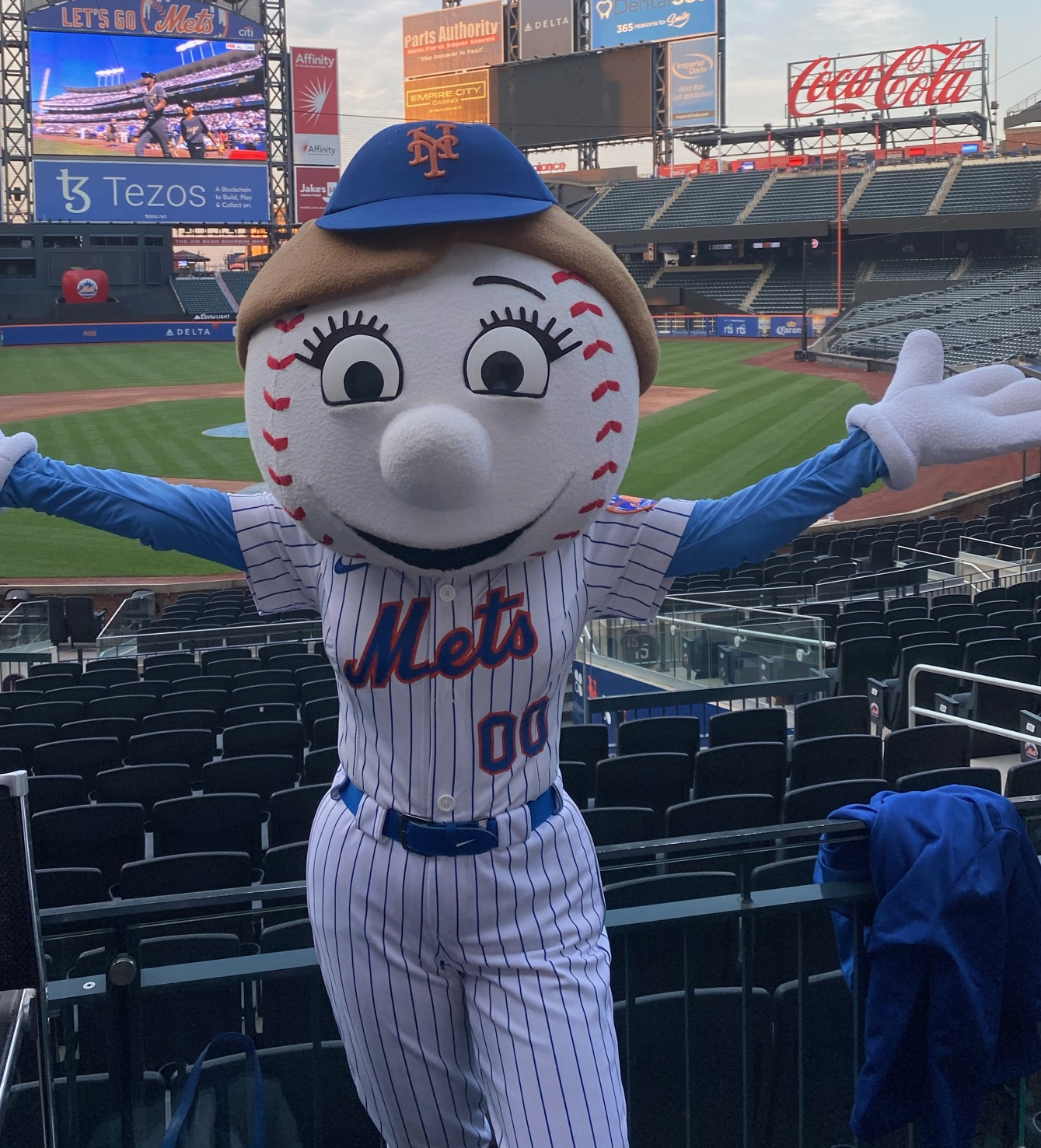 Other than Jan, there is a dearth of female mascots in American men’s major professional sports. There was, for a short period from 2000 to 2003, Diamond, mascot of the Toronto Blue Jays, but she was killed off in favor of only having her male counterpart, Ace. There’s even something of a dearth in women’s professional sports. The now-deceased Utah Royals had Cleo the Lioness, but she did not make the trip to Kansas City in 2021, and all but one of the WNBA’s mascots are either male or androgynous. As it stands, I’ve counted three explicitly female mascots in American professional sports — There’s the aforementioned Jan Met, as well as:

Penelope (P.K.) Kix, who appears to be an eagle, mascot of the Washington Spirit

and Lightning, the pegasus mascot of the Dallas Wings.

Both of them seem to be single, or at least their marital status is not disclosed officially. With that established, I feel that we can confidently state that Mr. and Mrs. Met, along with the Coyote and Mrs. Coyote, who I will note has not made an appearance since this television segment, are alone as married professional sports mascot couples in the United States. However, this does not include collegiate mascot couples, of which there are a few more.

What was interesting about the research involving the collegiate mascot pairs is that, while there are many more inter-gender mascot pairs in college sports, relatively few of them are explicitly married. For instance: Albert and Alberta Gator 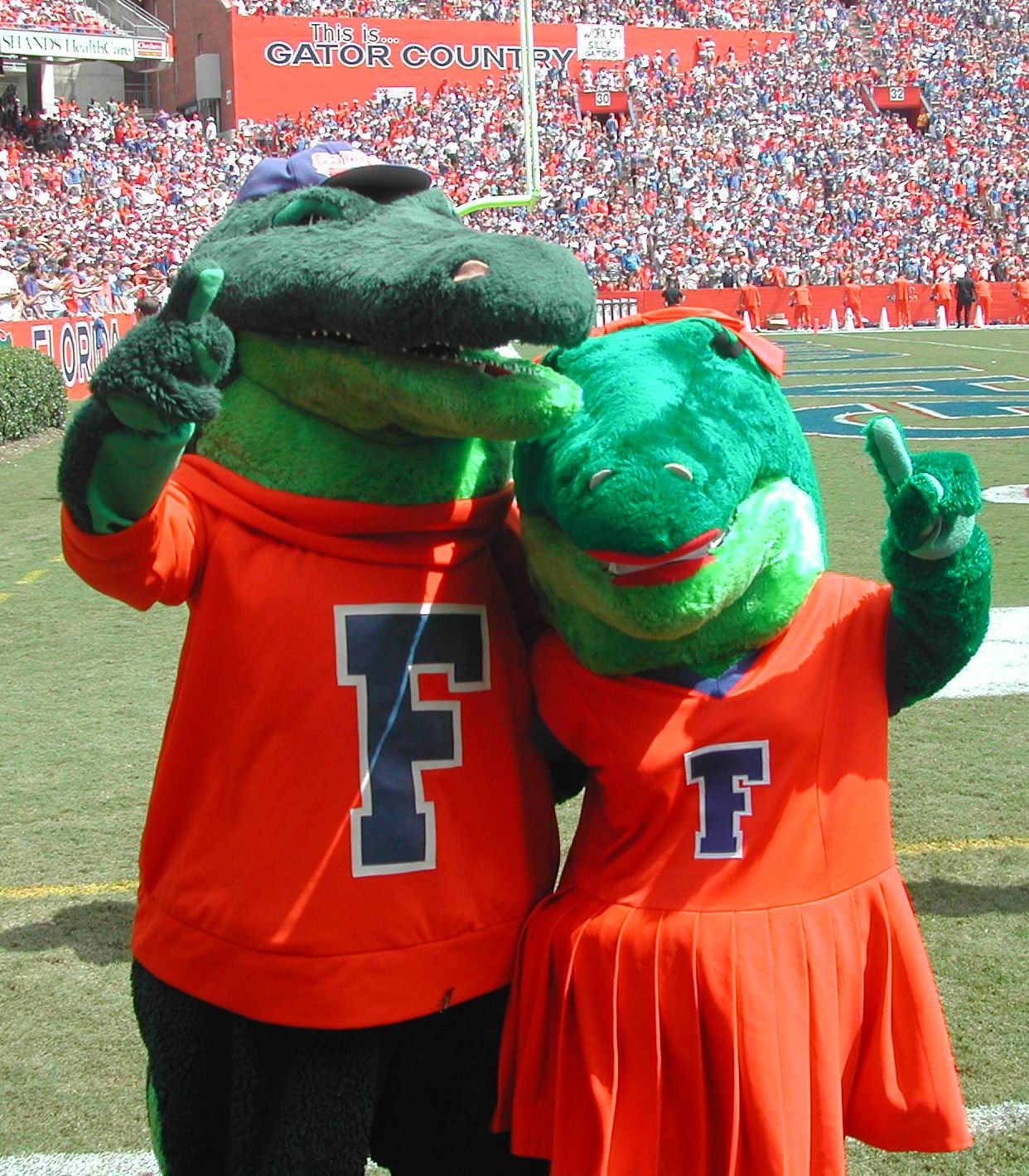 Albert is an anthropomorphic alligator in a sweater and a hat, Alberta is an anthropomorphic alligator in a dress and a bow who wears lipstick. Both of their interests are entirely limited to the Florida Gators of intercollegiate athletics. I would think, just out of necessity, both of them being the only bipedal alligators who wear clothes and care about the Florida Gators of intercollegiate athletics that exist, that they’d have to elope. But nay — The official Florida Gators website does NOT list them as matrimonially entwined. There is a photograph of them holding hands, or whatever the alligator equivalent to hands is, which implies some romantic feelings between the two — but nothing of marriage. Perhaps they’re waiting for the right moment, or they’re one of those couples that doesn’t like labels, where they both call each other partner, that sort of thing. Who am I to judge two bipedal gators that found one another?

There are many like this in intercollegiate athletics! To further elucidate: Shasta and Sasha, both bipedal Cougars, from the University of Houston, refer to one another as boyfriend and girlfriend on their official TikTok page, which I looked at for research purposes this evening. Theirs is a fraught relationship, though an intense one, and both joke about cheating on the other, which I suppose could indicate a level of comfort between one another that being the only two bipedal cougars in Southeastern Texas can bring. Nationwide, Shasta really only has to compete with Cosmo the BYU Cougar, who is jacked and can dance but is also Mormon and therefore stone sober and potentially holding regressive views on what Sasha’s role in the home would be, and Butch T. Cougar from Washington State, who is sequestered in Eastern Washington despite his intense swag. I also found that Joe and Josie Bruin, of UCLA, are considered to be “committed” and this seems also to be the case for Lobos Louie and Lucy of the University of New Mexico.

There are other heterosex but non-romantically entwined (and for the record there are no homosexual romantic mascot pairings at the moment) mascot pairings across intercollegiate athletics. Jays Big and Baby, from my humble alma mater, are officially Best Friends according to their TikTok page. This is sensible as one is nominally a baby. Willie Wildcat and Eco-Kat, to our knowledge, led an overwhelming and ironically toxic relationship that burned hot and bright while involving chains, handcuffs, whips, Willie kicking while posing as the letter S, et cetera in the bedroom, but are now no longer on speaking terms. The most interesting pairing is Bowling Green State University’s Freddie and Frieda Falcon. According to their Wikipedia page:

Frieda Falcon first appeared on February 25, 1966 as “Mrs. Freddie Falcon”. At this time, she was a male cheerleader in disguise. In 1974 Freddie took Frieda to the Homecoming Game. Frieda’s costume was borrowed from a woman in town who had worn it to a Halloween party. The costume was worn by a member of the Spirit and Traditions board. In 1980, Frieda was re-introduced as Freddie’s little sister.

That has it all. Marriage, genderbending, repurposement, reincarnation, and incest, all in one couple within a fifteen year span. Incredible stuff out of Ohio.

But who are the married mascot couples of intercollegiate athletics? I have found three couples who are, explicitly, engaged in lifelong monogamous holy matrimony.

The first is Arizona’s Wildcats, Wilbur and Wilma, officially Wilbur The Wildcat and Wilma The Wildcat — a rare instance in which both halves of a couple share a middle name. I suppose it could be a French sort of thing, like a Le Tissier thing, where the article has a presence in the last name. Wilbur is a bipedal wildcat who wears a cowboy hat, Wilma is a bipedal wildcat who wears a bow and a cheerleader’s outfit. According to Arizona athletics’s website, Wilbur and Wilma were officially married at the Arizona/Arizona State football game in 1986 and renewed their vows in 2006. Unfortunately I could find no photographic nor video evidence of either event. 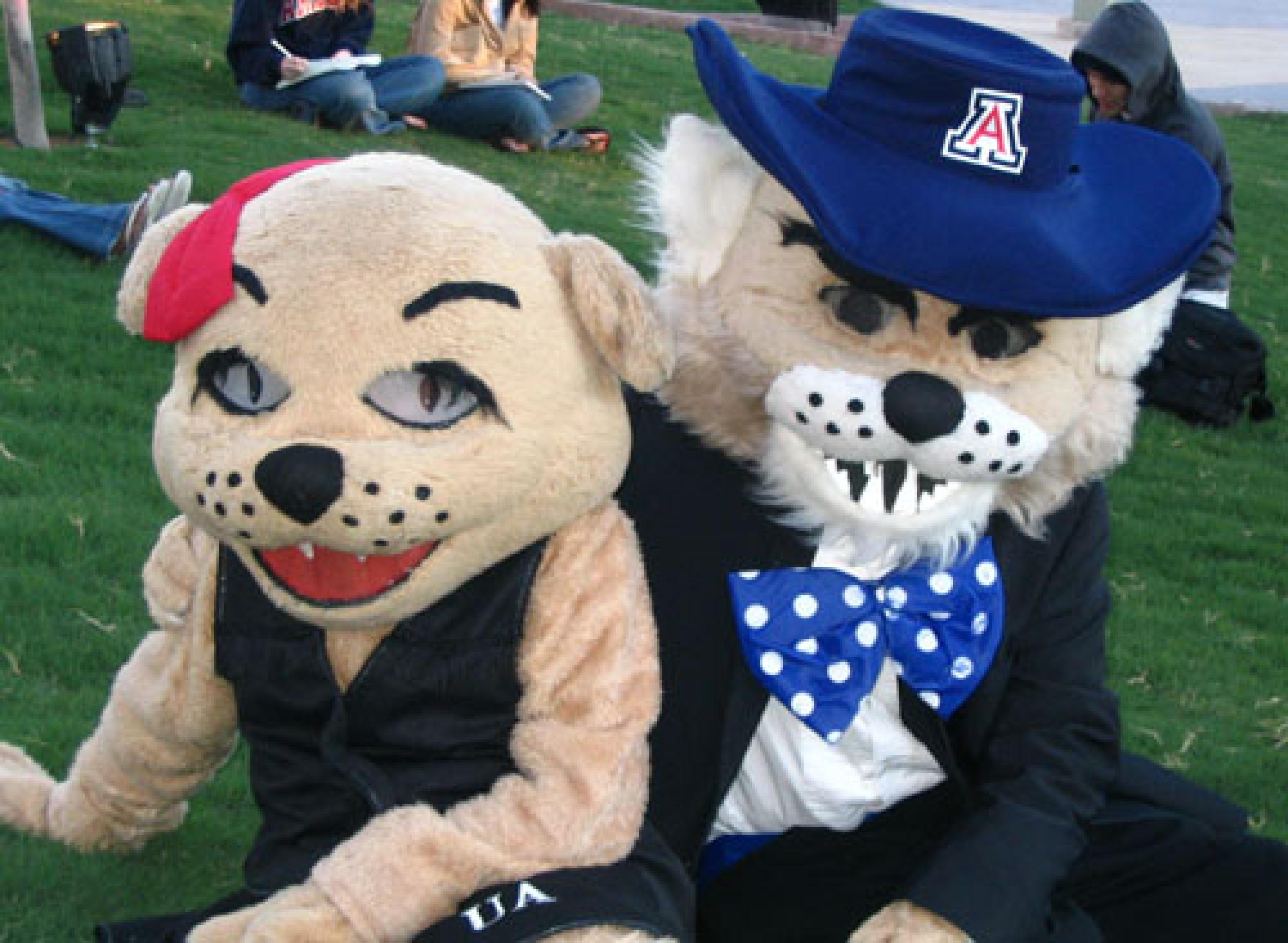 The happily married couple in formal wear. I will note Wilbur does not take the cowboy hat off in any situation, even in the tuxedo

On the other side of the country, there’s Mr. and Ms. Wuf of North Carolina State University, neither of whom seem to have first names. What I like about these two is that they are basically identical — 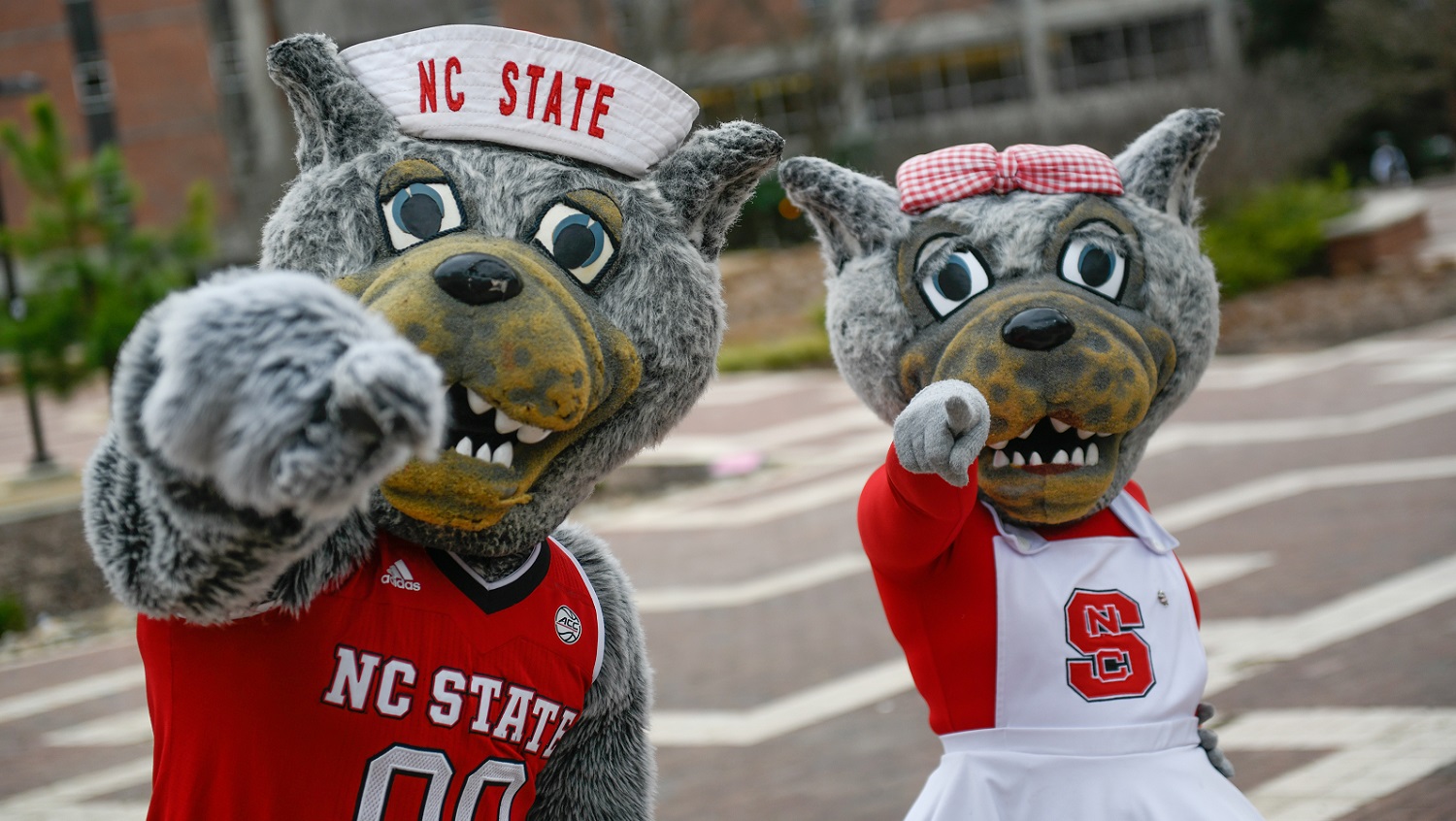 The only difference, save for their clothing, is that Ms. Wuf has slightly bushier eyelashes than Mr. Wuf and very faint lipstick around her snout. I also love that Mr. Wuf still wears the little sailor hat that the old Arthur Evans logo.

The two of them were officially married at halftime of an NC State basketball game against Wake Forest in 1981. Fittingly, the Demon Deacon presided over the ceremony.

Love that he kept the sailor hat on during his wedding

They brought the Demon Deacon back and renewed their vows at another NC State/Wake Forest game in 2011.

Then, finally, from the Football Championship Subdivision, we have Youngstown State’s Pete and Penny Penguin, also bipedal, though this is accurate to normal penguins as well. Pete and Penny were originally married in 1986 at halftime of a Youngstown State – Akron football game (the 1980s were the decade of mascot marriages) and renewed their vows at a private ceremony in 2018, which was filmed and uploaded to YouTube.

If you’d like more of these delivered right to your e-mail inbox when I put them up and remember to cross-post them, check out my Substack!