KU Fans: Please Tear Down the Goalposts this Saturday

I’ve heard what people say about Kansas football. It’s been over a year since the last win by a Kansas football team. This weekend, against Rhode Island, the Jayhawks’ fifteen game losing streak should – should – come to an end. 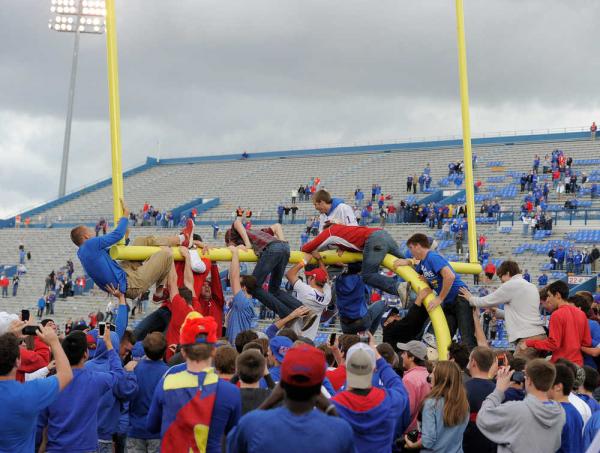 This should be cause for celebration. However, certain writers and fans around the Kansas Football fanbase have come out against the idea that Jayhawk fans storm Kivisto Field at Memorial Stadium this weekend in the case of a win. They say that our goalposts should stay where they are, they shouldn’t be torn down, they shouldn’t be drowned in Potter Lake. They don’t want to see this happen.

But that’s the thing. They don’t want to see this happen. What they don’t realize is this:

This is Not a case of want or want not. This is a case of need.

Kansas Fans Need to Tear Down the Goalposts this Weekend. For the Good of the World.

He is Hungry. The monster who lives at the bottom of Potter Lake with a name unpronounceable by human lips, is hungry. I spoke to him. He speaks telepathically, in a language known only as MychälríčHärdš, and he expressed his anger to me this past week. He has not eaten in over a year. The fans have not fed him a pure goalpost in well over a year. He has not eaten in 654 days, ever since the last win, a big one over the Iowa State Cyclones. He has been starved since then. He has hungered since December 17th of last year. He will eat again. He wants goalposts – pure goalposts, he described the one plunged into the lake in November of last year as “complete, impure bullshit. I don’t feed on baseball celebration.”

That only made him angrier. and hungrier.

If we do not, and he makes it out, then be forewarned: Run as hard as you can, keep a keen ear out for his primal call, and do not – do not ever – look in his eyes.

So, as we sing: Fight on, you Kansas Hawks. Give us a win, so we can give it another post.

The guy behind JoeBush.net and a lot of other things
View all posts by Joe Bush →
This entry was posted in KUpostin', Uncategorized. Bookmark the permalink.