To the Marching Jayhawks:

I knew this day would come. I knew there was going to be a time that I’d hang up the marching uniform and not take it off the rack again.

Granted, I’ve done this before. In November of 2012, I did the same thing, but with my high school marching uniform.

There’s something different about then and now. I knew back then I’d be marching in college, or, at least, I’d have the opportunity to march in college. I knew I’d be in college the next year. I knew more about my future back then.

In the summer of 2013, there was a week when I knew I didn’t want to be a Marching Jayhawk. I was told that college would be time-consuming, and I interpreted that as meaning that I wasn’t going to be able to get what I wanted out of college if I let band consume my life.

But I didn’t know what I actually wanted out of college. I don’t remember what I thought I would get if I wasn’t in the band. I don’t care what I thought I wanted anymore. This was the decision I made, to stick with the Marching Jayhawks, and I am so happy that I made the decision I made. I wonder now how much I would regret not joining the band if I hadn’t. I wouldn’t know how much this means to me now if I hadn’t had the experience. Marching Band gave me an opportunity to change what I knew. 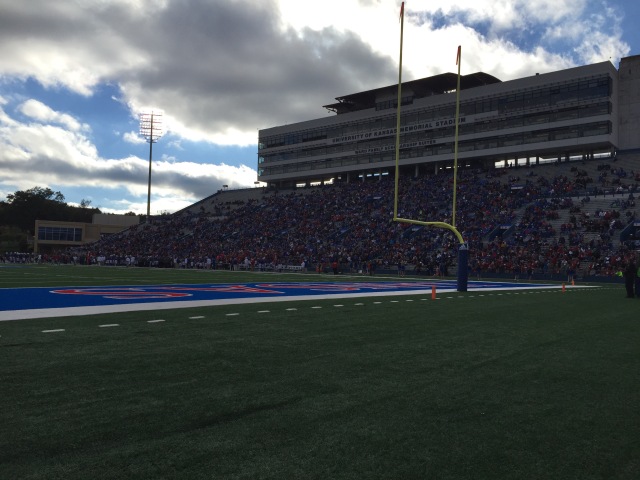 Memorial Stadium, field level, before our halftime show against Oklahoma in 2015. I know I use this picture all the time but I love the way this stadium looks on a late afternoon, covering the field in shadows with the sun behind.

Still, I consider that decision in summer of 2013 to face my fears, no matter how unfounded they were, to be one of the most important decisions I’ve made in college. It was that, then the decisions of joining Tau Beta Sigma in the fall of 2014, changing my major from journalism to French in the fall of 2014, and finally adding a second major in English in fall of 2015 that have changed my college experience for the better without a doubt.

The idea that I considered, in the summer of 2013, for a week, a few hours saved per week more important than the amazing people I’ve met and the incredible experiences I’ve had with them is heartbreaking. I know if I could go back then and let me at 18 understand what me at 21 knows, I know I wouldn’t have entertained the idea for a second.

Me and my roommate and great friend, Alden, during the 2015 Oklahoma game.

Kansas beat Texas on a last-minute field goal on my senior night. I linked arms with my fellow seniors and let so many tears flow down my face as we listened to those who came after us play us off. Every single one of those tears came from four years of work mixed with pleasure. Every single one of those tears was earned. I didn’t make it to the first note of Home on the Range without letting them spill down my face, but I was smiling the entire time. This chapter of my life is over, but I will never forget it, and I never want to.

The important thing that other marchers, before me and after me, should know, is that we have made an impact. The Marching Jayhawks as in institution will exist long after we graduate. But without us, it could not exist. Every single one of us is important to this band, from the drum majors to the uncertain freshman.

To those who came before me, thank you. You likely don’t know how much the little things you did inspired me. I still think back to what former drum majors said, how important it was to me as a freshman to be complimented by one of them. The discipline of former section and rank leaders has not been forgotten. I hope the love and dedication to this craft that I saw in them shines through me in anything I put my effort into as well as it did through them. 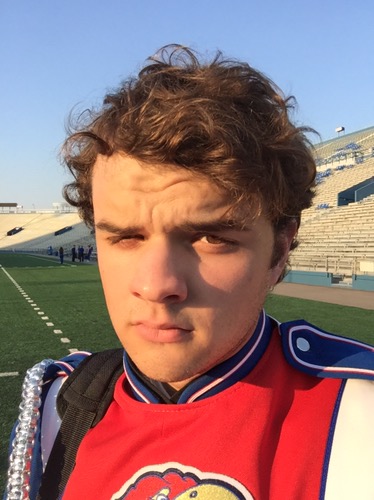 Self portrait, at picture day, 2015. I lost a lot of weight during the last part of 2015 and this was one of the first times I felt comfortable with my self-image.

To those who came after me, thank you. The least I can do is give thanks retroactively for the ways you have inspired me and proactively for the pride I will have in seeing you become even greater people and marchers over the next few years. Cherish this. Your enthusiasm and energy has been what has helped me in the hardest of times and enhanced the greatest of times this season.

In four years, I have witnessed eight wins and twenty-one losses. It would’ve been twenty-two but I missed a game in 2013 when I was out of the country. Yet, I am thankful for all twenty-nine games for which I was in attendance, and I can’t forget any of them. Even if the memory of the day leaves my mind, the impact that so many of my fellows had on me will be imprinted on me forever. Thank you, all of you, for always making it a Great Day to be a Jayhawk.

Also sorry for crossing myself on TV that one time

The guy behind JoeBush.net and a lot of other things
View all posts by Joe Bush →
This entry was posted in KUpostin' and tagged band, KU. Bookmark the permalink.