THE DELIBERATION: What if I Had a Clone?

I had a realization today. I don’t think about what I would do if I had a clone very often, but when I do, I always assume one of two things:

I had another realization today about these assumptions. Assuming that the clone is a genuine clone of me in terms of both physical stature and psychological contemplation, I have one question to answer if I actually want to know whether or not the clone would try to kill me: Would I want to kill the clone?

ALSO: I would like to take this moment to dispel the rumors that I already have a clone who lives in Texas. This man may look a little like me when the sun is in my eyes and I am dressed as Toad from Super Mario Bros 2, but he is not my clone, at least to my knowledge. 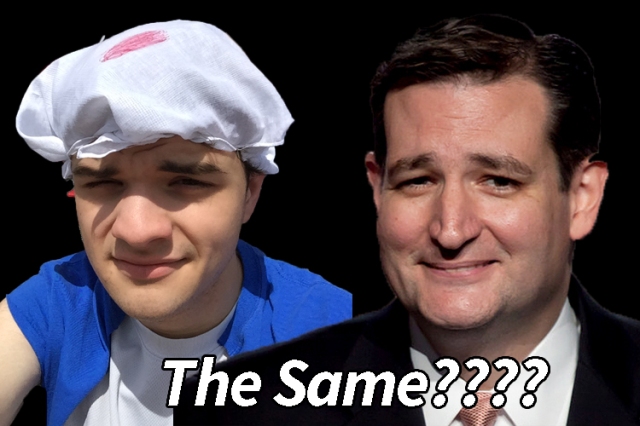 This – While I absolutely see the similarity, believe me, – is not the same man twice.

But, knowing that the relationship between me and the clone – if there is a relationship at all – will at the very least not be suicidal – opens up a whole new set of deliberations. These are the questions I have off of the top of my head, which I will be answering shortly:

The assumptions to be made in the situation here are these – I did not decide to create the clone, I did not clone myself, I do not remember being cloned, and neither I nor the clone know whether or not we are the clone. It’s entirely possible that I am the clone.

For all intents and purposes, I will refer to me, the one writing this article as “I” or “Me” or “Joe” and the clone will be referred to as “Horatio” because that’s the fake name I give to people in noisy coffee shops where my monosyllabic, soft-consonanted name will be drowned out by the noisiness.

For all intents and purposes, this photograph is me

For all intents and purposes, this photograph is Horatio.

1. Would the Clone and I Be Friends?

I do like myself. But I wonder if I could be friends with Horatio – like actual friends. At first thought, I wonder to myself, would I actually have anything to talk about? Because I think I would agree with Horatio on everything, at least, that’s how I assume it would work. We’re the same person, why wouldn’t we agree on everything?

But, then again, I think of how many of my own opinions I do not like, and how they come to change from day to day. For instance, here are a few opinions I have changed within the past few days:
Guacamole is an Alright Food, but I don’t really love it changed to I really like Guacamole

I have no interest in hockey changed to maybe I should try to watch this year’s NHL Playoffs, it might be cool

I assume Horatio would be a good friend to myself, even though I know our relationship would devolve into playing Tony Hawk’s Pro Skater 3 Trick Attack mode constantly.

2. Could the Clone and I Coexist?

I assume so. I like my living space to be about as clean as I tend to keep it, so I assume that Horatio and I would keep it about the same way. I have a hilariously limited

We would just kind of know that we’re exactly the same person, and I think we’d be okay with that. I mean, who knows better when to talk to me or when not to talk to me than myself? Horatio and I would kind of have to get along well, because we wouldn’t have anyone else!

Honestly, life with Horatio seems great! I can live with him, and he’d know when we’d get sick of each other, because it would be exactly when I’d get sick of him, but we’d both know that, so we would both leave each other when the time gets right for it to happen.

3. How Could the Clone and I Collaborate to get Work Done Better?

4. Would Working With the Clone Be Exploitation of the Clone?

The opposite effect of this is that every time that I get lazy, Horatio would also likely get lazy as well. Having a person who would always call me out on my Dumb Bullshit would be nice, but I don’t know if I personally have the gumption to call Horatio out on his Dumb Bullshit, so I can’t expect him to do the same with me.

So, really, it’ll be a little bit of a boost at points and not all that much worse at other points. Horatio and I would have to get different jobs that would pay the same, because that wouldn’t be fair if we weren’t working for the same amount.

5. Would I Seek Intercourse With the Clone?

Look… this is me, who is also Horatio:

I just – I don’t see it, guys. I wouldn’t want to fuck Horatio. Anyone else who would want to, you’re entitled to that feeling, and I’m flattered. But me? I’m not, like, repulsed by me, or anything, but I wouldn’t fuck Horatio. Horatio’s a fine looking guy, I think, but I’m not entranced by him. Horatio would be fine with that, and it wouldn’t be weird.

6. Would the Clone and I Have to Die at the Same Time?

I think so? I can’t think of a universe within which Horatio and I can die at different times and not have it be weird. If it were a disease to kill me, let’s say Cholera, then Horatio will have to know and live in fear of potentially contracting Cholera forever. Because he knows that it killed me, and he knows it, were he to contract it, would kill him.

Moose attack gets Horatio? Mooses remember. Mooses (Meese?) will seek me out and get me next.

Poison? Well… That might not be such a huge thing. I could probably avoid poison if Horatio gets into it and vice versa. Unless it’s like, malicious poisoning, in which case, I’m probably just about to get maliciously poisoned. Anyway, point is, I think I have to die with Horatio, and I am prepared to.

7. Would the Clone and I Eventually Separate?

Oh… yeah. Undeniably. This is the best thing about having a clone. I have several life paths that I would be happy with taking, and wouldn’t it be great to know that I have another me doing exactly what he wants? I want to teach, is my main thing right now. But I also would be really happy with being, like, an airplane attendant or a guy who makes brownies professionally somehow. Let’s say I went into teaching and Horatio went into the brownie trade. That’s great! I hope Horatio has a great time! I know he’d hope that I would have a good time too! Me and Horatio’s lives would separate at some point, and we’d both be happy for each other, and I would hope that we would both succeed.

This will never happen, but I hope that if I were to have a clone, we do not kill each other. Horatio, I think if you existed that I would probably like you, because I think that’s kind of the default state of being. Me, I hope you continue doing what you are doing, and if you go into the brownie trade, they need to be good brownies.