At some point in the year 2000, Activision figured out what they had with the Tony Hawk’s Pro Skater series. They had a tremendous first title and a sequel coming out that would build upon it in every way possible. They also seemed to think they had a formula. Tony Hawk’s Pro Skater 2 begot multiple different spinoffs: Mat Hoffman’s BMX in 2000, Shaun Palmer’s Pro Snowboarder in 2001, a sequel to Hoffman’s game in 2002, and a Wakeboarding game in 2003. All of these games took the Tony Hawk engine and adapted it to their own sports, and none of them matched whatever Pro Skater had.

Most of these were Tony Hawk clones mechanically, just a little bit more Pro Skater except with a different vehicle. Of course, a skateboard is not a BMX bike, nor a snowboard, nor a wakeboard, nor a surfboard, which is mostly why these games fell short. Trying to translate the simple, quick pressing of the square button to kickflip on a skateboard didn’t translate to that same motion doing a barrel roll on a snowboard, or a tailwhip on a bike. That awkward translation was a fact in level design, too, no developer made a space that worked for the snowboard, BMX, or wakeboard the way that Neversoft made the spaces skateboarders carved up.

Kelly Slater’s Pro Surfer was the weird one.

At some point, in 2013, the person who ran a video game store in my hometown decided that this game was worth less than one dollar.

When I say that those spinoffs fell short, I mean that they fell short in comparison. If Tony Hawk’s Pro Skater 1-3 averaged a nine out of ten, the spinoffs would’ve averaged a six. These weren’t bad games by any means, but they failed by comparison in the same way a spinoff almost always does. These games kept reminding me of the games they weren’t, and I’ve bounced off of all of them. Three separate times I’ve tried to restart Hoffman, probably, at least two attempts at Shaun Palmer, and I never even tried the later wakeboarding and motocross games.

I was keyed into Pro Surfer’s existence by Kelly Slater’s appearance in Tony Hawk’s Pro Skater 3 as an unlockable character, a full year before this game saw store shelves. I don’t remember how I ended up with a copy of the game, but I remember that same sort of bouncing off that happened for so many other Tony Hawk-likes back in 2003. This may have been the first game I ever remember disliking. 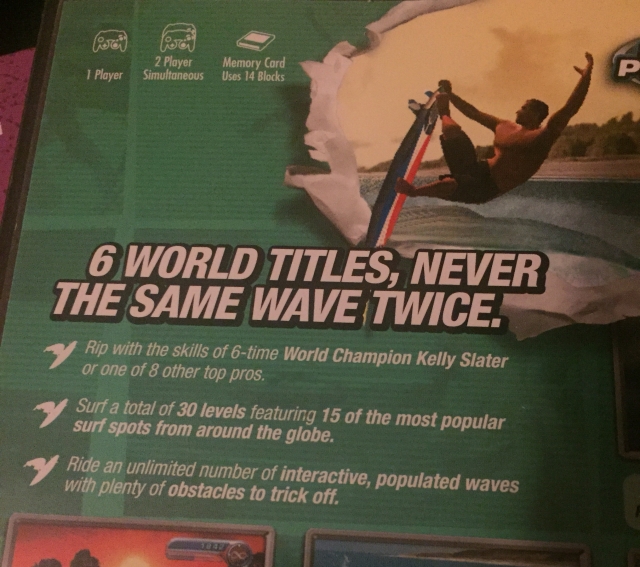 Both parts of the back of the box quote are false as I play this game. Kelly Slater now has eleven world titles, for one. Also, the waves in this game are painfully repetitive. What’s asked of the player is not necessarily repetitive, in fact, the sheer quantity of surfing moves that can be pulled off is fascinating in and of itself, but every wave feels almost exactly the same. The developers here, Treyarch, now known for the Call of Duty: Black Ops series, managed to create variety in level goals despite the monotony of the ever-similar waves.

This was maybe the riskiest of the Tony Hawk spinoffs, and that might be why I appreciate it more than the others. Making a surfing game out of the Pro Skater infrastructure doesn’t make sense on paper, and it doesn’t follow my brain’s logic in regards to this series. It’s like learning an alternate reality’s version of English, where the vocabulary’s the same but how it’s used is completely different. Kelly Slater’s Pro Surfer plays like a Pro Skater game mechanically, but exists in space differently from anything else, and I think that’s why I haven’t bounced off of it this time around.