The richest man in the world, James Amazon, has cut down the list of potential cities for his new big building or whatever to twenty. This year, 2018, twenty cities will fight to the death in the thunderdome for the right to have tech-yuppies move into their suburbs and patronize their Starbuckses. My money is on Atlanta because that city is good and Amazon owes it to them to gentrify it up just a lil’ bit.

Likewise, I, the most wretched man in the world, have decided to expand as well. The current Joe Bush Dot Net headquarters moves between the Squalor Closet and the Creepy Back Patio on a semi-daily basis, but I figure that I need another place to put down some legs and spread my online web-based creation wings. These are the six places I’ve chosen to potentially serve for JBDNHQ2, and the winner will be announced at some point probably. For those of you who sent in applications and weren’t selected, I’m incredibly proud of each one of you for your drive and creativity, sans Myrtle Beach, which sent me four envelopes each filled with  bird-poop speckled sand.

While these reasons might make Boise seem to be the logical candidate, this location may prove to be problematic for a few reasons. Boise’s biggest export is the potato, a food I don’t eat out of moral aversion. Boise is the childhood home of David Lynch, and I just can’t allow my such to have that much in common with a man who made Billy Ray Cyrus fuck in a major motion picture. Also, every image I’ve seen of Boise shows that their native grass is a vibrant blue, and I’m in a Benadryl and Red Wine-based stupor enough that walking through neon-blue grass might actually send my brain into a sort of shock from which I’ll never escape.

Like i know it’s funny that this goose thought their natural grass was water, but please keep in mind that I’m just not that much smarter than a goose.

The GarBarge, as they call it, would provide a hell of a lot of space and a hell of a lot of garbage to climb and play upon. Also, the stench mixed with the waves of the ocean would likely force sickness, and we all know that I write most of my stuff from a bathroom anyway.

The negative here is that the GarBarge was built in 1977 and has no internet capability when we’re at sea, wireless or wired, so I’ll have to post in bulk whenever we’re in port, which is only once a week. Though I think “Post Wednesday” could be a good publicity thing, It’d probably not be a sustainable long-term plan. Plus, we’d typically port in South Carolina, and I’m not allowed to go back there anymore.

The pros of this will be a large amount of space, and a lot of free rides that I could get working, either through a series of jury-rigs or through the help of a kindly older man like the Go-Karts scene in Heavyweights. The cons of this are, like, diseases from decades-old sitting water and squatters and the Bugs Bunny costume from 2004 coming back to life and killing me. 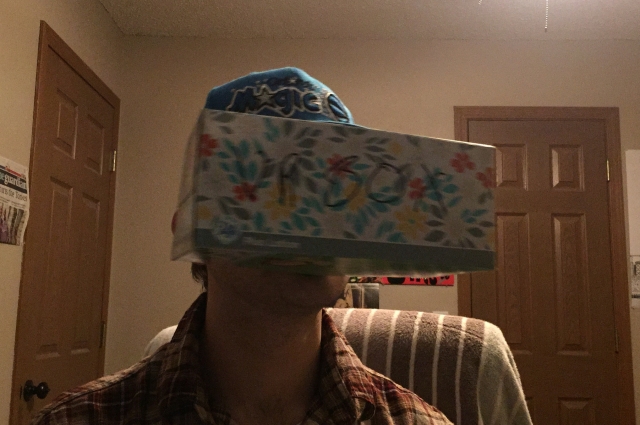 My VR budget unfortunately is very, very low nowadays and I’m not able to afford your Rifts or Vives or PSVRs or R-Zones. However, that hasn’t stopped me from starting a preliminary VR blogging experience that will allow me to take Joe Bush Dot Net into the Cyberspace dimension in perpetuity. Having a VRHQ2 will mean unlimited space, incredible colors, and a mountain vista I can walk by each morning on the way to my virtual office. Unfortunately, my current Cyberspace Blog experience requires that if I die in the cyberspace I also die in real life, so there are some kinks to work out, but the possibilities in VR are limitless and if I die because of them, then so be it.

The devil and I have some unfinished business. Years ago, I sold my soul to him in exchange for eternal happiness, good looks, and skate skills. I ended up with depression, the face that I have, and one (1) successful heelflip in 22 years. The devil owes me, and he’s stated as much when he gave me my soul and life purpose back in an AIM chat back in October of 2014. He hit me up through MSN Messenger last month to let me know he had space in Hell and was willing to further make up for his failure by giving me that space for JBDNHQ2.

It’s relatively roomy, Lake-of-Fire-front property with one bedroom and one bathroom. I’d be right down the hall from Napoleon III and Andrew Jackson, which is kind of cool, but I’d have Robert Johnson as an upstairs neighbor and I don’t know how much blues I’ll be able to take. I understand there’s a shared kitchen and it’s kind of nice, like he tells me Reagan always keeps the pantry stocked with jelly beans and so they’ll probably let me have space for my Oatmeal and Diet Dew. The amenities are nice but, y’know, the constant screeches of the damned is probably a little annoying.

I haven’t made my final decision, they’ve all got so many great qualities and I don’t know which one will be the winner just yet. It’ll take some time to mull over but I know I’ll get there soon and I’ll be placing down JBDNHQ2 by the end of my life at some point. While I won’t bring economic prosperity the way that Amazon will, I can promise some jokes and some fun, and, really, isn’t that the real economic prosperity at the end of the day?