I Went to a Padres Game Like Two Sundays Ago

Man, this is the longest time I’ve had to digest a game I watched before offering my opinion on said game. But, regardless, on April 15th, 2018, for the first time in my life, I watched a regular season Major League Baseball game in a stadium that wasn’t Kauffman Stadium.

I put far too much gravitas on that last sentence there. This was just a baseball game in another park, and it’s not like I’m so tied to Kauffman Stadium that sitting down in another stadium is like cheating on a loved one or anything. This was mostly based on a touristic ideal of what would be cool to do on a Sunday in San Diego, California, and boy was I right, because it was cool to see a Padres game on a Sunday in San Diego, California.

Petco Park was opened in 2004, which means that ballpark architects (ballparchitects, I assume they prefer to be called) had been thinking of the best way to build a stadium that gave off a sort of “basebally” feel for like a decade. What I’m saying is that this feels like it was built for baseball. It feels smaller and more homey than it would seem, a major-league sports stadium with a 40,000+ person capacity, but I never felt overwhelmed by it. Granted, the Padres are not good, which means they didn’t fill the stadium out, but I remember looking up towards the upper decks and thinking “that’s not all that far away.”

By comparison, Kauffman Stadium – which is my one other point of reference so I’m going to bring it up a lot – feels like the second largest structure I’ve visited in my entire life, and that’s not an exaggeration. Number one is the adjacent Arrowhead Stadium. Oddly enough, Kauffman actually seats fewer people than Petco Park does. While Kauffman Stadium has a relatively nice atmosphere, especially after the renovations of the late ‘aughts, it has the inner soul and outer drabness of a stadium built in the 1960s. This is mostly due to Petco being a newer stadium, so more recent changes in how ballparks are lain out are imprinted on my brain, and I’ve been biased towards the new one. Both of them perform their function quite well, both are great places to see a baseball game, but Petco seems to have more of a frontward-face towards form.

Kansas City fans: This is not to say I don’t like Kauffman Stadium. Please do not accuse me of self-hate or anything.

If it’s any solace, Arrowhead Stadium looks like a football stadium for a team called the Chiefs, and Qualcomm Stadium is a huge unused eyesore

THERE’S A HUGE BUILDING JUST KIND OF IN THE STADIUM

So, the story goes that as the city and the Padres built Petco Park, they picked a place in the famous Gaslamp District, decided they’d tear down a few buildings, and then place the stadium where the buildings once were. However, the Western Metal Supply Co. building was designated a historical structure, and the team was prohibited from tearing it down. Thus, they just sorta left it there and built around it. There’s like a bar where people can go and eat chips or whatever during the game in it. It would be probably cool if someone had hit a home run up there, but nobody did.

I always have like a contingency plan for if a ball is hit towards me, like I’ll take off my hat and catch it or catch it in the cup of drink I have and then I’ll drink what’s left in the cup, or like I’ll be holding a big ol carton of popcorn and then it’d get hit, throwing popcorn everywhere and making a huge mess. If I were to sit up there in that bar, holding like a rack of ribs or a plate of tater tots, I’d have no fun because I’d constantly fret about what I’d do were a ball to come my way. I’d purposely try to order something with as many loose bits as I could, to maximize the food flyin’ everywhere potential. This is why I’m horrible to take to baseball games.

The Padres played the Giants, and their fans showed up very well. Their color is bright orange, which makes them unmistakeable to the naked eye. They were mostly nice and polite, and it was cool to be surrounded by other outsiders even though I had a Padres hat on.

Laid back, really my favorite type of fan, the person who’s bored on a Sunday and decided to watch baseball. I feel like there’s a fundamental difference between the SD fan experience and the Kansas City fan experience, partially because Petco Park is in an accessible part of the city, unlike Kauffman Stadium, which is located in a parking lot in the middle of a field.

Man this team would’ve been killer in like 2010. Instead they’re just “a Major League Baseball team”. But with this roster, in 2010, the San Francisco Giants would’ve won the World Series instead of whoever actually won the world series that year.

Man does this team have like two (2) good players. Freddy Galvis is good. Jose Pirela is good. Eric Hosmer was “on the bench” and “did not play” I guess. The fans behind me liked Austin Hedges but I don’t know enough about the guy. The Padres won by like eight runs. 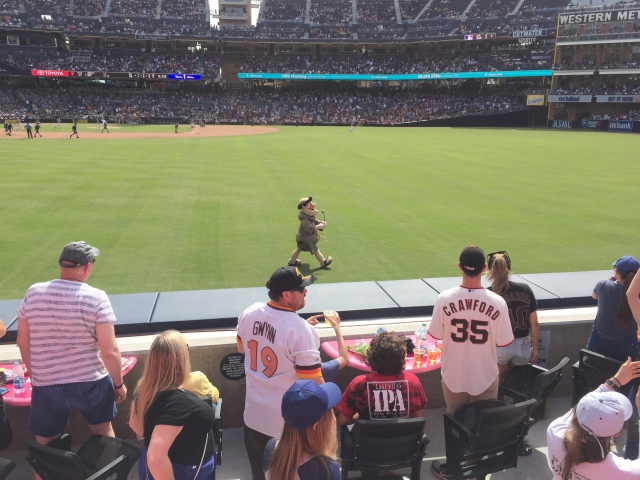 Man, look at that guy. Also, apparently the chicken has no allegiance to the Padres at all? I expected to see a chicken. I saw no such chicken.

WHAT JOE ATE AND DRANK

-Garlic fries, ironic given the opponent

-Half of my mother’s Ketel Korn

Well, this seems like a baseball team in San Diego, California. Though I am relocating to that city, I feel no obligation to learn all that much about these Padres. I’m moving there in an academic context, and there are few things less important to the study of rhetorical structure than Walks/Hits per Innings Pitched. I’m excited to turn towards the church of funny priest mascot and I’m dedicated to learning about the Padres for the next like week and a half until another shiny thing strikes my little eye.