Oscar’s Gay?: Five Office Theories too Directly Stated Within the Show to be False

It’s been nearly a decade since we last departed Scranton, but the fan theories still persist! Undoubtedly you’ve heard of some of my favorites – Toby Flenderson is the Scranton strangler, Michael Scott is actually smart, Kevin laundered all of Dunder Mifflin’s money, they make you think about the show we watched for years! But what about those that don’t make you think at all? What about those fan theories that were so completely obvious and in many cases completely directly stated in the script of the show?

ERIN HANNON, NOT AS HOPELESS AS SHE SEEMED? Erin and several of the office men had sexual relationships

During her years at Dunder Mifflin, Erin Hannon (Portrayed by Ellie Kemper) appeared to be a dork, unlucky in love and even less lucky in not working behind the reception desk. While her receptionist predecessor, Pam Beesly, fell in love with Jim, it may seem as if she never had sex with anyone within the office. But, actually, as stated multiple times, Erin actually had sex with three men in the office, first Gabe from Sabre, then Andy from the Office, and later the guy who came in during season 9 whose name I forgot. All of them boned. There was a ton of intra-office boning on this show, and my personal experiences have not reflected this amount of intercourse in any arena of life, but hope holds. 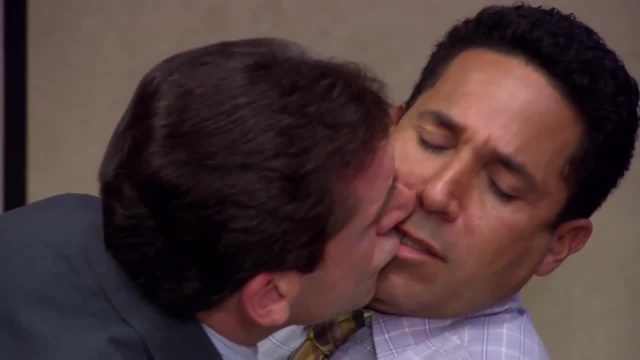 Though you may know him now as the insurance agent who hangs out with the whole backcourt of the Houston Rockets for some reason, Oscar Nunes’ accountant role provided the show with an intelligent straight man to counter Michael Scott’s antics. However, one theory put forward by a significant plot-line in the third season of the show and multiple lines of dialogue throughout the rest of the show, including several relationships with other men, shows that Oscar Martinez was actually gay! Color us surprised by the progressive overtones by a show from mid-aughts NBC.

FEELIN’ HOT HOT HOT: Michael Scott and Jan Levenson both went on the Jamaica vacation TOGETHER

The business relationship of Jan Levenson and Michael Scott was nothing if not incredibly strained. However, heavy overtones in the show led us to believe that Michael and Jan actually went on Michael’s season 2 trip to Jamaica together, and very potentially Had Sex on said trip, as a photograph of Michael and a naked Jan surfaced at the hands of Michael Scott and was sent around the office. Who could’ve predicted so much boning?

In a season 3 episode entitled “Grief Counseling,” the death of former boss Ed Truck is referenced by Michael and David Wallace. However, it was the severity of his death that might shock you. Ed Truck was actually killed by decapitation, or the severing of the neck and head from the spine, as stated by Creed Bratton. Decapitation, in 100% of cases, is a fatal phenomenon, so it seems safe to say that Truck’s decapitation led, potentially immediately, to his death.

HOLLY’S FOLLY: Holly Flax was actually at another branch of Dunder Mifflin during Season 6

Her shirt says “Nashua” which is a different city from Scranton, where the show takes place

Amy Ryan’s receptionist character melted Michael Scott’s heart with her kindness and unashamed dorkiness during season five, but broke his heart later on that same season. There were multiple episodes dedicated to Michael and Holly’s strife as it became clear that Holly would move to Nashua, New Hampshire, so it’s very obviously true that she was at the Nashua branch of Dunder Mifflin, which she even states herself during the Season 5 finale, “Company Picnic”, as her shirt states the word “Nashua”, which matches up with the town where she said she’d moved. Eventually, she returns to Scranton, and then she leaves again and takes Michael, after which things take a dip in quality