I Went to My Last Sporting Kansas City Game on Saturday 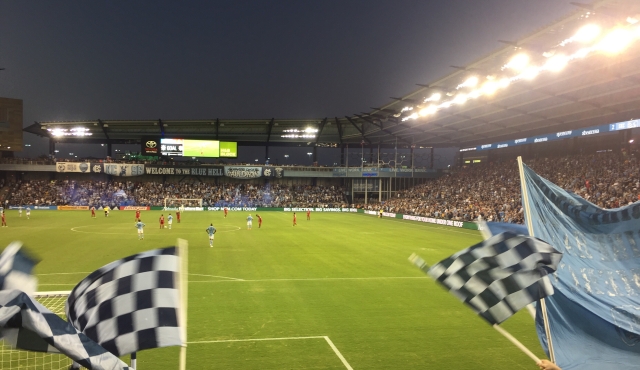 I was wondering what the first thing I was going to miss about home was. I specify: thing. I know I’m going to miss a lot of people, I’ve come to terms with that and I’m going to grind through the earned turmoil of goodbyes to those who mean the most to me. It wouldn’t be home if I didn’t have people to miss.

But it also strikes me that I’m going to have to have things to miss. Things, or events, or places, define home to me. I grew up in a developed suburb, so most of the locales of my childhood and adolescence were cut from a cloth, like shopping malls and chain restaurants. A lot of those are gone now too. Much of what remains I barely recognize. I rarely feel that any space retains what it had during my growth. Children’s Mercy Park is one of the rare exceptions.

Sporting Kansas City looks a lot different from the way they looked the first time that I watched them play in 2006. That was two stadiums, an ownership group, a coach, and a branding change ago. It’s been twelve years now since those first games in Arrowhead Stadium. I was one of those dots of blue on a landscape of empty red seats. I don’t denigrate those Wizards games – They had a genuine but specific magic to them that I don’t think can be replicated. The Wizards felt like an anomaly, squatting on borrowed land, running on as much love as the 7,000 of us who showed up could muster. Crimson and gold banners lined the stadium, 40+ years of NFL legends named on the ring overlooking the lower deck, and, yet, on those nights, that stadium belonged to us. I remember wondering when I’d start to see the names of Wizards greats – Preki, Meola, Johnston – looking down upon the field as well.

It has been twelve years. Each game, I look up and see those names, except in a different building, one covered in blue and filled past capacity. It’s changed since 2011, too. What seemed novel at my first Sporting match in the late summer of that year became expected at some point. I don’t worry whether or not we’ll fill the stadium up. I don’t worry that it’ll be gone once I leave. The latent insecurity that a lot of American soccer fans, myself included, developed through the years of uncertainty regarding whether or not the league would be around in a half-decade has subsided. While I’m leaving, and likely not returning to Children’s Mercy Park for a long while, I know it’ll be there when I come back.

My favorite moment of every Sporting match happens well before kickoff. It happens as I enter the stadium and see the vibrant green pitch expand before me. The contrast of the well-manicured field and the navy blue seats that surround it is so striking, and it hasn’t changed since in seven years. I was sixteen the first time that I lay eyes upon it, I’m twenty-three now, and it’s just as impactful as ever. The feeling when Sporting takes the lead on a goal – Saturday it happened on a lovely sequence of passing from Diego Rubio to Johnny Russell – that hasn’t changed either.

I will miss this. I will miss this but I know it’s not going anywhere. As someone who was there during a period of time when I couldn’t have said that in confidence, and as someone who watched as another beloved hometown soccer team uprooted and moved to Utah last year, I’m glad to be able to say so.

I’ll see Sporting in person again. I’m only an hour south of the Galaxy and LAFC, and Sporting’s my connection to cultural Kansas City I care to keep. But that park is home. And I will miss home.

The rest of July might be a bit slow for the site because I’ll be in the process of moving, if you couldn’t glean that from the theme of the entire piece preceding this. Check out The Post Hole and The Tweet Hole and The Youtube Page for more of “That Web Shit.”