Biden Can Pry #Joe2020 From My Cold, Dead Hands 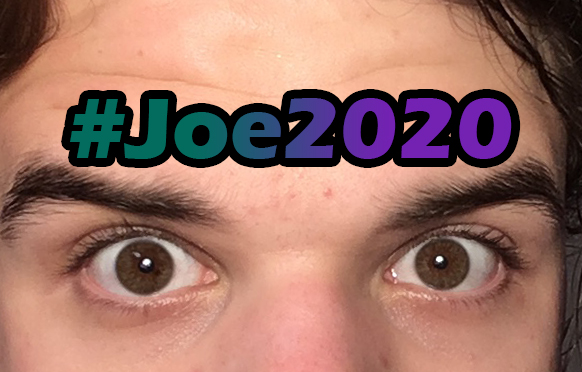 Daddy Joe’s finally here! Time to update the registered Democratic party candidates list to… 233 now. Biden will campaign primarily on the fact that people have heard of him, he’s gonna pretend like he wants to fight Donald Trump, and he’ll try to bring us back to the halcyon days of 2013 again. He will win the primary but lose the election.

Anyway, there is NO EXCUSE for him taking the hashtag that I’ve planned to roll out in support of my perfect vision.

#Joe2020 was the subject of a significant planning campaign by me. It’s been a bad time for me, recently. I don’t have a lot to draw from for pride. I’m a very mediocre person without a lot to draw from – I’m not talented at anything other than jumping the coffee table in my living room. But I have very good vision.

#Joe2020 was SUPPOSED to be the celebration of my record of 20/20 vision, one which has been consistent over my 24 years of life. Everyone in my family has fallen to the glasses bug, myself included. But mine are either clear frames which I wear when I feel insecure about how dark the circles around my eyes get or prisms which correct my lazy eye. But for me? What I see at twenty yards is what I should be able to see at twenty yards. And God damn it, I’m proud of that. I’m proud of that because I have to be proud of something.

And I’ll be damned if I let some old guy whose big thing is putting people in jail for possessing a joint tarnish the valor of the #Joe2020 hashtag. Please, for the love of God, and for the sake of my tattered, worthless shell of a sense of pride, we need to take #Joe2020 back and get us on track.

#Joe2020, from here on out, will be used only to congratulate me on my perfect vision. I have decreed it, and it will be. Biden be damned.