JoeBush.net does NOT Accept the JD Power and Associates Award for “Most Inexplicable Mildew Smell”

I don’t know how to fix it, please stop drawing attention to it. 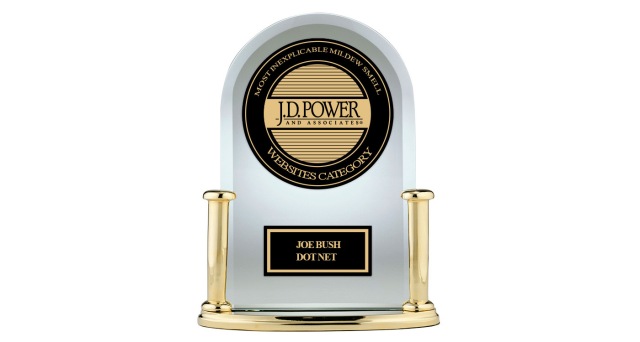 Look. I do not know why the site smells. I do not know why, for some reason, the website emits an odor that smells like you left wet pair of jeans in the washer for a week and forgot about them. I am aware of no other site that emits a faint but definitely present odor through one’s laptop speakers, and I do not know why mine is the one that does. However, JD Power and Associates is exercising very poor institutional oversight in presenting me this award.

But this does not help the problem. This is the problem with awards like these – they’re all about celebrating the past, and never about bringing things to the future. For this reason, I do not want to commemorate the mildew smell.

Also how do I send the trophy back to you? There was no return address on the box, also the box was made of black cardboard and felt dense in a way that a cardboard box realistically should not. Smelled faintly of what I know has to be blood though I can’t say I’ve ever smelled blood before.