The Joe Bush Dot Net Research Team has been hard at work this year in unearthing documents that the public at large has been unable to see up until now. I’ve been fist deep in a pile of Nabisco documents this weekend, and we’ve poured over hundreds of useless press releases, birth certificates, and chemical details of every single one of the fucking Chips Ahoy ingredients, and there are a lot, legally a Chips Ahoy soft cookie isn’t either cookie or chocolate, somehow. It’s pure chemical softness, somehow.

Two days ago, I hopped upon the cookie maker’s Rosetta Stone, as I’m calling it: The Novelty Oreo Flavor Guide to 2017. You will taste these new flavors – or, rather, your aunt will post a picture of a box of every one of these flavors on Facebook with a caption like “Okay THIS has gone TOO FAR!” These are listed in chronological order, with a brief description either written by Nabisco or by myself.

Oreo never releases a new cookie in January because half of the nation has sworn off sweets for the first two weeks of the month. In February, Oreo plans to celebrate the life of one of America’s greatest men – Abraham Lincoln! It’s a chocolate cookie with chocolate filling, the first of its kind. Get ready to Choc-laim your independence from the same old confederate Oreo! You get to decide if it meets its demise in John “Milk”es Booth! 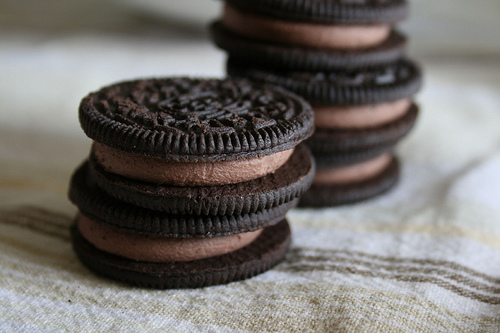 Yeah, fuckers, we did it. You thought we went too far with Triple Stuft, but we fuckin did it and just in time for you to gorge yourself watch shitty basketball all month. We’ll put your damn Alma Mater’s logo on it, too, if you want. 250 Calories per sandwich, and at this point it is legally considered a sandwich, and you can get the Sebastian the Ibis himself on the cookie.

To celebrate Easter we’ve got a delicious, religious combo. The cookie’s that weird wafer the church loves and the filling is wine flavor, with a slight amount of alcohol. Not, like, enough to get you trashed unless you eat the whole box in one sitting, and people “shouldn’t eat the whole box”. This is NOT sacrilegious, the pope we have right now’s a cool one with the Twitter account and all that, he said it was cool. So it’s cool.

May – Whoopsies! We Put the Oreo Filling In a Nutter Butter Cookie!

This is more of a Nutter Butter promotion, if we’re being honest with ourselves. They’re losing money in the whole novelty cookie business because they sort of have to stick with Peanut Butter. This gives them a chance to have a cookie that isn’t Peanut Butter for a month. It’s not our fault their cookies have a limited scope and are just as bad for you as Oreos are.

Get that Summer Beach Body by eating worse versions of your favorite snacks. You’re still snacking, but you’re sad while doing it.

Yeah, fuck it, put an American flag somewhere on the box, photoshop it in. We don’t have our inevitable Olympic domination of the EU to build ourselves up on, but we’ll still sell ’em. Make the filling blue, white, and red in that order, we can sell it to France in June as well for Bastille Day.

Yeah this will only sell to people who either really love grapefruit or hate themselves, which our research indicates are the same people.

Nnyyeah fuck you you’ll buy one box, you know you will. You’ll be at Walgreens and you’ll hear a voice in the back of your head saying “What’ll the kids say? Salt Oreos?” “They wouldn’t sell it if it wasn’t good, right?” then you’ll drop $3.99 on the box. You’ll eat the whole box, thinking you might acquire a taste for it sometime. You won’t.

That looks like an unnatural red due to poor photoshop, but that’s what makes it so bizarre when you see it in person and it looks exactly like that

November? More like No-Brainer! We wanted to do turkey but the flavor of turkey doesn’t match up well with chocolate.

December – Something Christmas, We’ll Get to It

We’ve got time, there’s probably gonna be a movie tie-in we can do or something. If all else fails we’ll bring back the Jesus one. Or we might just not be fucking weirdos this month.

The guy behind JoeBush.net and a lot of other things
View all posts by Joe Bush →
This entry was posted in Uncategorized and tagged Oreo. Bookmark the permalink.