I Went to a Spring Training Baseball Game on Monday

The stadium in Surprise is among the nicest I’ve ever been to – granted, I’ve probably only been to four total baseball stadia (Kauffman and CommunityAmerica in Kansas City, and Hoglund and Arrocha in Lawrence), but there was a – surprisingly – intimate design to the whole thing, it really seemed like every seat was pretty good, even when I was walking around behind the walls.

Of course, our seats were especially nice, very close to home plate, with a good view of the path of the ball from the pitcher to the batter. My viewpoint looked kind of like how Tony La Russa Baseball for the Sega Genesis did. 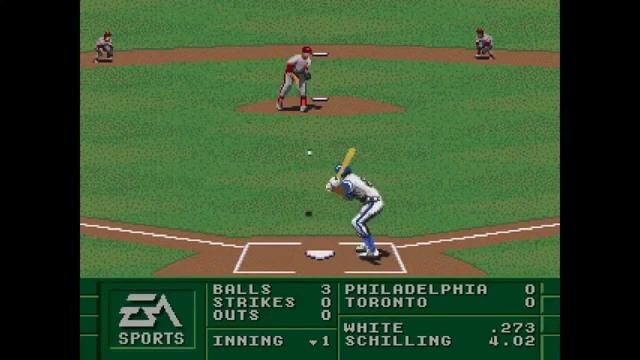 Two factors struck me when I sat down to watch my beloved ‘Yals:

1. I don’t know any of our upcoming prospects

2. I don’t know almost any of our current players

I was able to recognize four of them by name, one of them by brief description, and the rest of them I was out of luck on. Raul Mondesi seems like he’s alright, Alex Gordon is Very Good, Still, I Think, and there was a guy named O’Hearn who got a couple of hits for the Royals who I hadn’t heard of beforehand. I was able to name Mike’s favorite player for the Reds pretty easily, but I was out of luck outside of that.

It’s as simple as that. I paid eleven dollars for a big plastic thing of Boulevard – which was cool to find in the American Southwest – and I drank it in ninety degree heat and I sweat all over the place. Given the fact that

A. I already expected some inflated ballpark prices

B. It was Boulevard and not, like, Coors Light

4. The Royals had a Bad Eighth Inning 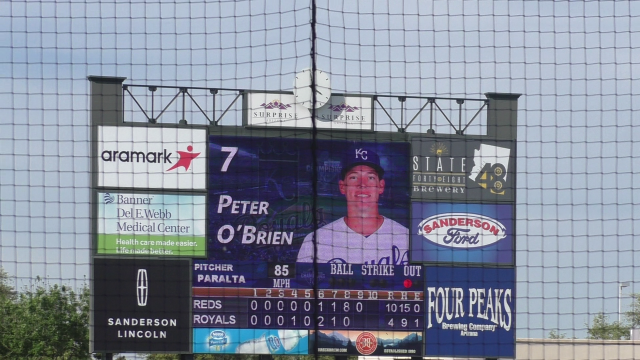 I don’t trust necessarily for Spring Training to reflect the regular season, but one of the worst decisions made by manager Ned Yost was to let the other team score ten runs in the eighth inning. It kind of made it impossible for the Royals to win the game, though I thought they had a shot at one point.

5. Spring Training Games have a Unique but Slightly Unsettling atmosphere

Three things stuck out to me here

A. These games go quick

Not having to stop between every inning for the Kiss Cam and Two Dudes Dressed as Continental Tires Hitting Each Other with Foam Swords tends to force the game along. I don’t think we were there for more than three hours, and the game progressed without too much stoppage. Baseball gets a reputation for taking a while and featuring some standing, but that was not my experience in Surprise this week.

B. There’s a whole lot of blue in these stands in Arizona

Now, KU is on spring break right now, and if you’re not looking to litter and urinate on a beach, pre-season baseball in a cool city within a cool state is a possible draw for your vacation plans. This is what happened to me. There were a number of Reds fans, my boy Mike included, but the Royals faithful owned that stadium. There was some sparse “Let’s Go Royals!” chanting in there, but everybody was just kind of there to watch

C. They don’t need us

The players, I mean. That was the most interesting thing about this to me was the fact that regardless of the presence of the stands, or the presence of fans, or whoever, this game was going to be played. This is the weird thing that distinguishes preseason baseball from all of the other preseason sports. I’ve known people who have gone to Chiefs preseason games because they somehow ended up with eight tickets and had nothing to do that night. I know people who go to Kansas Basketball preseason games because it’s like a return to a nice building where all of their friends are.

In the case of preseason baseball, you have to make an effort to get down there if you aren’t a transplant or a fan of the Arizona Diamondbacks. In the grand scheme, these games are meaningful, but it doesn’t reflect your team’s ultimate record, so nobody’s losing their minds at the concept of the Royals blowing a two run lead in a spring training game while missing four of their best players. 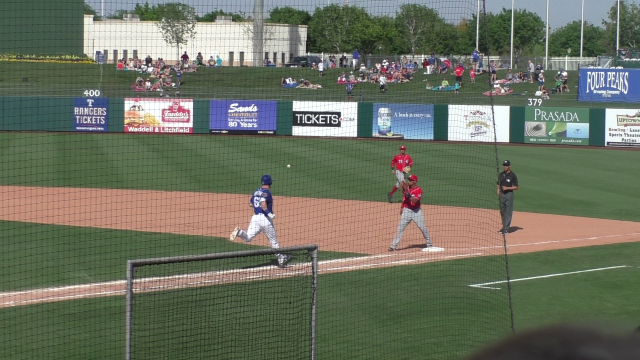 It creates kind of a weird atmosphere, where I and everyone around me isn’t totally invested in the result of the game so much as we’re invested in watching a fun game of baseball in the lovely weather of Surprise, Arizona. The Royals and Reds were playing baseball, and me and several hundred other people were there having a good time watching a game of baseball that happened to feature the Royals and Reds. Despite the loss, none of the Royals fans were visibly upset, and I assume most of us went back and ate chips or sat down and read a book or something.

I wasn’t there to watch Royals Baseball, I was there to watch Baseball, which was played by the Royals. There was as much investment in this game as I think there would have been were the game played between, like, the Oakland Athletics and the Montreal Expos. I still would’ve had fun.

That made this experience very interesting, and probably the best in-stadium baseball experience that I’ve ever had. It was like watching a movie, or the circus, or BMX or something, where we all had a good time.

It’s baseball in it’s purest form, a game played not for the fans but for the expressed purpose of the players becoming better players than the players they were on the previous day.

6. The Men in Front of Us Kept Dunking on Jason Whitlock

When I am a 55+ year old man, I want more than anything else to be a 55+ year old man who sits with another 55+ year old man at a baseball game and argues with that other man about everything in the entire world. At some point, one of the two guys compared the other to Jason Whitlock – Personally, outside of his skin color and hair amount, I don’t think the guy looked like Jason Whitlock. The man then proceeded to burn Mr. Whitlock with the type of flat scorn that can only come from a man who has lived a life:

I am sorry, Jason.

The guy behind JoeBush.net and a lot of other things
View all posts by Joe Bush →
This entry was posted in Sportstalkin. Bookmark the permalink.