The Compendium of All of Joe’s Other Bad Opinions

This week has come to a merciful end, and I am now about to spout potentially the dumbest things that I think, period. This is going to be like a Jerry Seinfeld routine, except in text, done in a list format, without a charming slap bass riff, and none of you – and I mean none of you – will know what the deal is with whatever I’m about to put down here. I don’t even know yet

American money should take the initiative that Canada and the UK took and make the switch to colorful, waterproof money 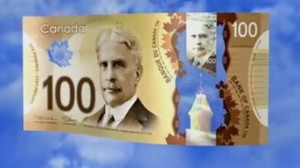 Also, it’s flying in front of a virtual sky in this image that I stole from a real news source’s website

Now, I love ol’ Georgie, and the dollar bill is iconic, but why do they all have to be green? Why can’t they be cool and plasticky and waterproof and have the little clear bit that the Canadian bills have? I don’t know much about counterfeiting stuff, but it’d probably be harder to fake a Canadian dollar than an American dollar. Even barring that, it just looks so cool, and you know, looking down at your wallet, immediately which bill is which depending upon the color. In the United States, you’ve gotta fan the money out and figure out what’s what. This isn’t that much of a hassle, but still, the Canadian money looks cool, feels cool, and it’s very, very slightly more convenient! All three of those reasons should justify the complete overhaul of our paper money system, in my opinion.

This is the true peak of American culture. For ancient Egypt, their largest pyramid was a tomb to a pharaoh, a place to honor the life and death of an important political figure. For us, our largest pyramid is a place to go to purchase deer jerky and fly rods. That’s… honestly, a beautiful thing that speaks so much to the United States and the delightful priorities that we have. I am being genuine here, I think it’s great that for whatever reason, this huge glass pyramid in Memphis, Tennessee is home to an outdoor supply store, and I am disappointed that I was unable to make it to said Bass Pro Pyramid when I was in Memphis when I was there last September.

One day, though… one day.

Lawrence, Kansas is in dire need of one of them big miniature golf/batting cages/go karts establishments

There’s like one mini-golf course in Lawrence, and it’s really in the back room of an arcade. I know that we’re no longer in the Clintonian boom-times of the 1990s, when I assume that most of the family fun entertainment centers were built up, but it’s been far too long. There’s a course in Independence, Missouri. There’s one in Parkville, Missouri. Topeka practically runneth over with Family Fun. Even Salina has Jumpin’ Joes and the SONIC with the batting cages that apparently exists.

What is it about Lawrence that seems to drive the centers of family fun away? I can actually think of like thirty answers to that question, but please, give us a chance for some family fun! I’ve been scratching at my forearms for weeks in a vague chance to recapture the spirit of one game of ski-ball to no avail. We could host futsal there, or like roller hockey or something! Just put it out in West Lawrence where people don’t live!

The presidencies of George H.W. Bush and George W. Bush have had a net negative impact on my life specifically

I am not. Now, my sister, who shall remain unnamed for her anonymity’s sake, almost shares a name with George W’s wife, so I think she’s had it worse. But, still, every now and then, I get asked – Are you related to the former president George W. Bush?

I will say no. Inevitably, the next question comes:

Oh, okay. Are you related to the broccoli guy?

I will again, say no, as he is actually the former president George W. Bush’s mom or dad, I think, so there’s no way that I’m related to one and not the other

Are you related to Jeb, then?

To this, I will answer Yes, Because in a Way, We’re All Related to Jeb. But in terms of biology, no, I am not.

I am not related to any political figure. Not either of the Georgies, nor Queen Kate of England, nor the Bush currently ruling as the Impresario of Beans, nor his dog. Surprisingly few people ask me if I am relating to Reggie, the former disgraced king of football and player for the Miami Dolphins, but how could I be? I went to a school that beats Texas in football.

But I am still asked. And even after today, I will continue to be asked.

This Man, in this Tank, Slightly Ruined My Life. And I will forgive him never.

This opinion made me a millennial Twitter mogul for a second, so I have to stick to it now. Look out for that yellow Mountain Dew Kickstart, if they sell that at football games, I’ll probably never move away.

Yellow Mountain Dew Kickstart is the height of soft-drink technology

Everything belongs on a pizza 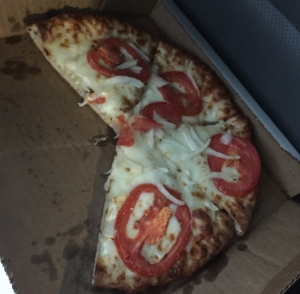 This pizza is what’s called a Karen’s B.T.O, from Pizza Shuttle in Lawrence, Kansas. Upon this pizza is cheese, tomato slices, onions, and mayonnaise. That sounds abnormal, and it is a little abnormal. However, I ate it, and it was actually pretty good. The sort of zest from the mayonnaise actually mixed in with the cheese well (and I do like a good mayonnaise, despite the horrible PR that it tends to get). The tomatoes were far better than I had any right to expect from the place that doesn’t take cards and will give you a pizza for five dollars as long as you call ahead. They weren’t so juicy that they soggied up the pizza, nor too dry, and every bite was fairly clean with them. The onion added just the little bit of bite that made the BTO quite an enjoyable eating experience.

Note: The Karen’s B.T.O. at Pizza Shuttle normally also comes with bacon bits on top, but Joe’s Stomach forced him out of the bacon eating game a while ago

My experience here was at least entirely out of spite for the monolithic question that seems to have dominated the past year or so – Does pineapple belong on a pizza?

I say yes, because a good pineapple on a pizza with banana peppers and jalapeños is a delightful treat for the whole family, like sweet, tangy, and spicy all in one bite and I really recommend that everybody gives that a shot at some point in their lives. However, I know some people who get unnaturally upset about this question, faux-threatening violence on people who disagree with them on party icebreaker questions.

The disagreement level on this question is so needlessly hostile. I know, ultimately, it means nothing. And it’s important to have discussions about seemingly minor topics like these, especially this year, when discussion is dominated by the anger due to the man currently in the White House and the general pessimism that pervades everyone nowadays what with the global warming and pro football concussions all that. I guess it’s important to talk about some dumb shit every now and then, because at least we are still able to discuss some dumb shit every now and then, we at least take the time to ask the question, does one specific fruit go on a pizza?

But the language around this question always rubs me the wrong way. Words like “should” and “belong” are thrown around in conversations like this, and this is where I take issue – There is no value in setting up a definition of what should go on a pizza, as modern American Pizza has skewed so far from what pizza originally was, so any hard-line definition is setting an arbitrary definition for something born out of adaptation over years and years in the first place. Take a look at this piece from Alexandre Dumas in  Le Corricolo from 1835 that I found on Wikipedia. He mentions lard, and little fishes, and more lard, and cheese, bread, and tomatoes. He doesn’t mention pineapple, sure, but he also doesn’t mention pepperoni, sausage, or any of the other modern staples of pizza topping. If you went into a pizzeria today and asked for two types of lard on your pizza, you’d probably get weird looks. That’s because pizza, as a concept, has changed over the course of time. It’s a food with some history, and adding pineapples, or banana peppers, or strawberries or peas or whatever, is just adding to the history of a delightfully delicious and malleable dish. Maybe in fifty years, we’ll see peanut butter, or fried potatoes, or something I can’t even think of on pizzas, assuming the world hasn’t shriveled into hell due to climate change.

I know it doesn’t work for everyone. If you think pineapple or onions or whatever shouldn’t be on pizza because you think it’s gross, that is fine, and chicken tenders do exist, and you can have them whenever you’d like. But please, there is no status for modern pizza to uphold. We have the delicious staple of modern pizza because people in the past tried new things that stuck around. Someone, years ago, chopped up sausages into little circles and put it on a pizza. The red baron put pizza on a French bread slice and made you put it in an oven. Salina’s own Tony put it in a freezer for safe keeping. Mister Totino rolled his pizzas by hand into little rolls and revolutionized food forever. Reggie Fils-Aime just put a big ol pizza in a box and into a car and on to your table. All of these people have pushed the pizza industry forward, and we have a whole world of beautiful culinary options now thanks to them. Names like Digiorno, Godfather, Little Caesar, and, of course, our beloved Papa John, they fought tooth and nail to give us what we love today. History remembers those who pushed pizza forward, and forgets those who tried to stop the revolutions that ultimately benefitted us. Let it push us forward. Let the pineapple flow through history and let it gain its place as in history.

I don’t like steak, but if you put it on a pizza, and it works, okay. It belongs there.

I don’t like pickle relish, but if you put it on a pizza, and it works, okay. It belongs there.

I don’t like steak sauce, but if you put it on a pizza, and it works, okay. It belongs there.

I don’t like artichoke, but if you put it on a pizza, and it works, okay. It belongs there.