Dispatch from the Szechuan Sauce Mines

Boss says we’ve let ’em down… We ain’t got that much to give them, though.

You see this? This looks like a rock, and maybe it is, but damn it, this is what we got down here in the Szechuan Sauce mines. This is where you get the shit. One of these little briquettes, if broken properly, gets you like… half of a milliliter, a drip, of sauce. Apparently it’s good sauce, but we get paid $4.13 per milliliter, so any sauce I taste is coming out of my own pocket.

Mining the sauce isn’t a great time either. If you do it wrong, you lose all of it, and there’s no perfect way to get it. If I go through ten rocks, I probably get sauce out of like three of ’em, and I end up with like maybe half of a Diet Pepsi bottle worth of sauce by the end of each work day. It’s tough work but it’s a lot of cash. But it’s not a lot of sauce, if you catch my drift.

It was all good for like 20 years, we made what we made and we shipped it wherever we shipped it, which was okay especially after we had to shut down two thirds of the mine in like 2004 or so (It’s the damned Super Size Me man’s fault, McDonald’s really overhauled after he puked in their parking lot).

Then the Rich and Mortie program came back and fucked it all up.

This man and his hair and coat have ruined this job. The boy I am okay with but he’s on thin ice.

Folks I’ve been working my fingers to the bone since April, since that cartoon old man yelled at a McDonalds clerk or something and suddenly it was the fuckin’ Disney movie rush all over again, except now we’re understaffed and we got less space and rocks to work with. Now I tell you I didn’t give a damn about Heavyweights or the Rescuers or whatever the hell the Disney film was in 1997, and I don’t give a damn about the sauce man and small boy show now. But profit is profit, and baby needs a pair of shoes, preferably never worn.

We exhausted our small stash of previously produced sauce and then worked double and triple overtime for more of the shit after Rich and Mortie made it famous again. Comin’ into the mine the day after that episode was like staring down an avalanche, we knew things would never be the same. It’s been toil, toil, toil since then and we managed to get about twenty packets per participating restaurant filled. We know it was a stretch, but we did all we could. We did all we fucking could.

Now I’m seeing riots and shit in the McDonalds that I haven’t seen since the Milwaukee Beanie Baby Brawl of 1996, and it’s all over some damned McNugget sauce. 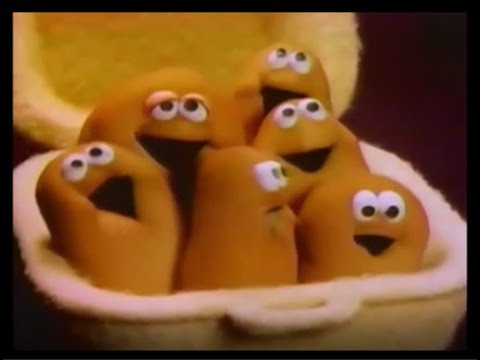 I haven’t been able to eat a McNugget since I had to put one of these poor bastards out of its misery in the mines. I can’t even look at ’em without hearing those futile final words and weak little breaths over and over again

If they knew, they wouldn’t be rioting. I would hope not, at least. I’m still working, I’ve got about a quarter bottle of Diet Pepsi done and I’m only about an hour and a half of the way into my day. Maybe it’ll get better, y’know time will tell, man, but I tell you one thing – That show and better be damn good. That sauce better be damn good, too.