A Learning Experience in a $30 Bottle: Trump Wine Review

Yeah it’s uh, as good as you expect it to be, and that is also not the point 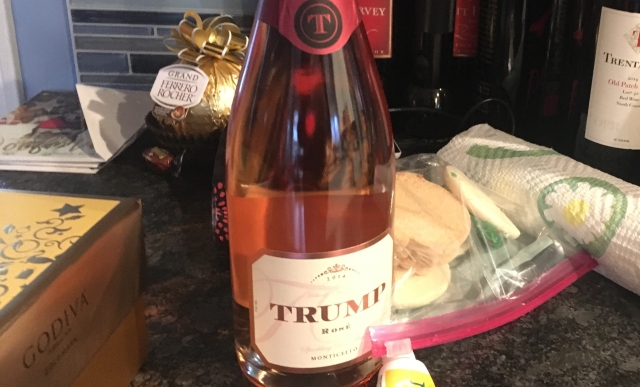 I was at my grandparents’ home only a few days ago when I first encountered Trump wine. It was referenced by people in the know almost cryptically, like “Yeah, we have a lot of Trump Wine” in the basement, as if that statement was supposed to mean something more than that. I figured initially that the wine to which they referred would be some #Resistance thing called like “Cheeto Blend” or “Covfefe Sauvignon”, something that liberals can waste money on and call direct action, something that someone who still calls him “Drumpf” or some other bullshit would own.

But in reality, the “Trump Wine” we were expected to taste was uh, just Trump wine. It was made in the Trump winery in North Carolina. My grandparents aren’t Trump fans, in fact they’re quite anti-Trump, at least rhetorically, so I was surprised to see that they owned two cases of Trump wine.

Now, they received the wine as a gift from a family member I barely knew. Understanding it as a gift kind of opens up three pathways for perceiving the wine’s existence:

It’s the third thing. This acts on a problem-solving principle I’m going to call Weis’ Razor, an updated Occam’s Razor for the late-twenty-teens: The solution wherein someone attempts to dunk on you tends to be the correct one. This is named for ex French National Basketball Team guard Frederic Weis, who notably did not expect Vince Carter to attempt to dunk on him in the 2000 Sydney Olympics and then got dunked on with a face full of Vince Carter’s entire dick. The French call it “Le Dunk de la Mort” or alternatively “Le Dunk de Toutes les Genitales de Vince Carter sur le Figure de Frederic Weis”

Now that we have this out of the way, it’s important to convey something. I do not know specifically this branch of the family that purchases shitty, overpriced wine with the name of a child jailor on it and sends it to other family members out of spite, and could not have attributed anything to them at all before coming into contact with the gift of Trump Wine. But I now have an attribute I can attribute to that part of the family thanks to this gift, and that is that they’re weird.

Regardless of if the libs were indeed triggered by this gift, giving the gift of shitty overpriced wine to flaunt a political victory is an absolutely weird thing to do, and the mantle of “weirdo wing of the family” should be rightfully donated to them and away from the part of the family that features the 23 year old with the comedy blog.

Now, the wine itself is obtusely mediocre. The picture here is of the sparkling Rose, which tasted like an alcoholic bottle of strawberry Bubly, and was actually the best that Trump winery has to offer in my experience. The white sparkling wine tasted like Juicy Juice that was left in a dark room for eighteen years. The red blend tasted simultaneously like Wild Cherry Nyquil you take at 1:30 when you want to get to sleep and the swig of Vanilla Extract you kick back at 1:30 AM when you’re out of booze but want to get more drunk and the expired Ocean Spray Cran-Cherry juice you thought you bought more recently than you did. Any self-respecting grocery store manager would place Trump wine on the bottom shelf for five dollars next to the Bartles and Jaymes.

Trump Wine is not so much a drink as it is a learning experience that also ends up with you intoxicated. I have learned which part of my family is composed at least partially of spiteful weirdos. I have also now learned that shitty wine comes out of North Carolina. Finally, I also learned that if I am ever to make shitty wine, I will be able to turn a profit if I attach it to the name of a political leader with a cult-like following of weirdos who attach value to spiting family members.

So please look forward to Mueller High Life, a bottle which will launch at $40 per bottle from Joe Bush dot Net Winery in the Spring of 2019, which you can ship to your conservative relatives if you’re into severing familial relationships.