The Berhalter Era Has Begun

This weekend felt like a trip to Sweet Puttin’ Cakes, like Mike and I started thinking about MLS 1.0, and I started a sentence “Y’know what I love? The chants of maybe 500-600 people echoing against the seats of an NFL stadium..” and by the end of that sentence, I was in Glendale watching the USMNT.

Not a lot of stories begin in Glendale. It kind of seems like not a lot of anything happens in Glendale. I know next to nothing about Glendale – I had a good time at a bar outside of the stadium the night before the match, and on that same night I spent twenty dollars at a Dave & Busters, but before this match, I had as much of an emotional attachment to Glendale, Arizona as I do to any other suburb of any other major city in the country.

However, a new era of American soccer began in Glendale on Sunday, and I’m grateful to say that I was there. Regardless of when the Berhalter era ends, I’m going to be able to say that I was able to watch its beginning.

Even if that beginning took place in a stadium that was, by generous estimate, only about fifteen percent filled with spectators.

The January camp USMNT match is rarely must-see television. Only a few of the outfield players who started on Sunday will be starting in the Gold Cup this coming summer, which should make American fans kind of optimistic – We have enough players playing well in top European Leagues and outside of MLS to fill out a starting eleven, something that couldn’t really have been said even in the team’s best years.

Even if this match featured a USMNT B-Team, they were facing an outmatched Panamanian B-Team, and it was right to expect them to roll over Panama. This expectation created some unrest within the American fans, an unrest that only grew over the first forty scoreless minutes. For the most part, the first January friendly is a relatively low-scoring affair, but this match was supposed to represent something more than the average friendly does. As minute after minute passed in the first half with nary a goal in sight, we grew somewhat jittery, getting frustrated at Gyasi Zardes for his heavy touches and holding heads in mild disbelief as a Nick Lima shot went wide.

But in the fortieth minute, Zardes again got a touch, this time getting the ball to Corey Baird, who found a streaking Djordje Mihalovic for the first goal of the Berhalter era. Perhaps this is a positive omen – Mihailovic, a twenty year-old player out of the Chicago Fire youth system, may develop into a significant part of the USMNT during Berhalter’s time at the helm. At the very least, a significant number of American fans will have no trouble pronouncing his name after this weekend.

After that first dam was broken, the waters seemed to clear for the US. The defensive play was excellent, something to expect from a Berhalter defense, and Zack Steffen made every one of the scant few saves he needed to make. In the second half came goals from two Los Angeles Football Club players, something kind of fitting considering the Black and Gold’s rise last year in MLS.

I left this match positively impressed by a number of players. Mihailovic, Baird, and Lima all really impressed offensively, and the center back tandem of Walker Zimmerman and Aaron Long were excellent on defense. Michael Bradley, for what it’s worth, played very well.

This was the view of Mike’s car in the free Volkswagen lot for Volkswagen drivers, provided by Volkswagen. The lot did not fill up

I have not been to a soccer game quite like that in a long while. Matches at Children’s Mercy Park in Kansas City were never short of sold-out. Even the sparsely attended NWSL matches I used to frequent at least matched relatively small crowds to relatively small venues.

This, however… This match brought me back. I still vividly remember being an eleven year-old boy, watching the Kansas City Wizards take on the Chicago Fire, waiting for the minute where goals scored would result in free Papa Johns, listening for the PA system to play the Homer Simpson “D’OH” sound effect whenever the opposition made a mistake, in a sea of empty red and yellow seats in Arrowhead Stadium. I also still vividly remember watching the small but dedicated Cauldron, who banged drums and sang songs each game regardless of the absence of a crowd around them, and wishing I was a part of that little group having a hell of a time despite their surroundings.

Sunday provided me with that experience. The American Outlaws in Phoenix came out in full-force, and we had a damn good time! The pre-game tailgate was great, the party at the bar the night before was great, and there’s something invigorating about being the only section making noise in an otherwise-sparse arena. After the game, the players came over and thanked us for being out there.

I know, going forward, that Berhalter’s USMNT will play to bigger crowds in more appropriate venues. Their first Gold Cup match in May, in the Twin Cities’ new Allianz Field, should present a more raucous atmosphere.

But there’s something kinda nice about having the era start here. Hopefully, one day, it’ll be special to say that I was one of the precious few people who was inattendance for Gregg Berhalter’s first match as USMNT coach.

If not… Well, it was a good time regardless. 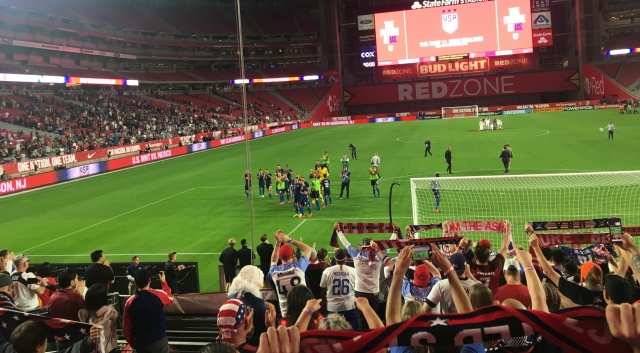