Heartbreak at the Banc – A Sporting KC Fan Experiences LAFC

Losing on a late goal on the road sucks, but in a way, it’s what I came for.

The way that Major League Soccer has developed since my first match in the fall of 2006 is something I need to step back and admire every now and then. A simple case study to exactly prove my point here is what happened with the team in Los Angeles county that isn’t the Galaxy between then and now. Even in Chivas USA’s early seasons, even when they were good, even when they had guys like Klestjan and Guzan playing well, the Chivas USA aura was negligible. Chivas USA was a lost club, a club sans identity, playing to crowds of a couple thousand well past the point where that was normal or acceptable.

But the non-Galaxy team in LA County now? Holy shit.

The Banc of California Stadium experience is incredible, one of the best in-stadium experiences I’ve ever had, ranking up there in my memory with venues like Allen Fieldhouse, Children’s Mercy Park, and Arrowhead Stadium at their best. There’s a really genuine joy I see in the LAFC faithful, an Angelino jubilance that so often gets ignored in the glitzy teams that otherwise represent the city. There’s a genuine flavor here, one unique to Los Angeles, one that the wine-and-cheese crowds you see on TV at Lakers, Kings, and even Galaxy games don’t give off.

The most recent additions to MLS in LA, Atlanta, and Minnesota have a sort of carefree, almost effortless spirit to their fandom that I’m glad to see in Major League Soccer. These clubs haven’t had to claw for existence or recognition in their municipalities the way that a lot of earlier clubs did, and it’s reflected in the very brash and very original fanbases they’ve cultivated. If nothing else, it was nice to watch an MLS match and not hear different songs from the ones the rest of the MLS clubs sing. If I lived closer to LA, I’d probably go to a couple of LAFC matches this year to be a part of the 3252.

However, I live in San Diego, so the only reason I was making the two hour long excursion up to Millennium Park on the 5 is to see the team that introduced me to soccer take on the black and gold on opening day. 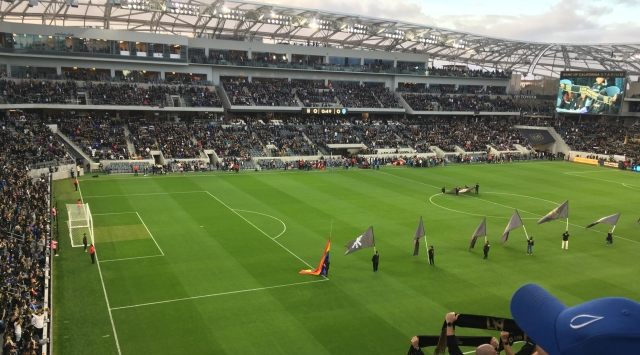 This was not an ideal match to trek North for. SKC had played a match in Toluca, Mexico, in the Toluqueño altitude, merely four days prior. Peter Vermes decided to start the same lineup he’d started on Thurdsday. They got out to a fast start with a Krisztian Nemeth goal (which I declare to be a good omen, considering his inability to score goals in his stint with the Revs and his short time in KC last year). After a while, though, the fatigue became obvious. Heavy legs led to heavy tackles, which led to seven yellow cards and eventually a sending-off for Roger Espinoza. It was almost a given that LAFC would draw level, which they did thanks to Diego Rossi just after the break.

I held out hope that at the very least they’d salvage a point as the match dragged on, but that hope was shattered by the strike of Adama Diomande four minutes into stoppage time. I doubt that there’s a more heartbreaking way to watch a beloved team lose: Watching an entire stadium worth of people joyfully launched to their feat as your chest takes on a weight that threatens to bring you to your knees. It’s a strange, strange sort of thing, knowing that LAFC fans are going to take that with them forever. It’s a classic ending, one that enters into a club and a league’s lore. How lucky was I to get to be there for it, even if it made me want to vomit as it happened.

I questioned, as I stood there in the din of 22,000 screaming, many of whom I could see letting out some cathartic aggression in the general direction of the section full of people in blue, why I was there in the first place. This was the first time I’d set foot in Los Angeles in over a decade. I went up there, got hit with an intense hit of sadness, and then drove home. Why the hell did I do this to myself?

I think I was laying in bed when I actually got to the answer: I need this. I kind of want this. This sort of sadness is so intense, such a gut punch, that it’s kind of invigorating. Where else can you get that sort of sadness in a way that doesn’t have severe, life-altering consequences?

It turns out that I’m still very much a lil emo boy at heart. I’m grateful that soccer can be the low I came here for, the South Philly basement from out of which I come out swinging, the thing I can scream “make me feel alive” at and get a response back, regardless of if it’s a happy one or not. That, absolutely, was worth the momentary misery.

As a full experience, I’d give it a thumbs up! But in the moment, I wasn’t feeling quite that chipper.

Also, just wanna shout out Weston, the guy from Des Moines who stood next to me and gave my girlfriend a bottle of water because neither her nor I had cash on us. You’re a real one and I appreciate you. For the Glory of the City.

The one LAFC fan who flipped us the bird was not a nice man but I understand. I have flipped many a bird in the moment and lived to regret it. Also the beer there is fifteen dollars so sneak some in your pants if you can. Find other Stadium Tips and Tricks at the Tweet Hole and the Post Hole, and give me three dollars on Ko-Fi. I might be back up in Carson in September for the KC/Galaxy match but no promises.